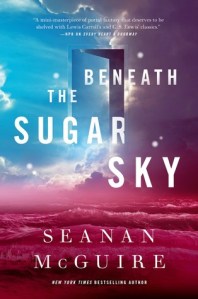 “For others, the lure of a world where they fit is too great to escape, and they will spend the rest of their lives rattling at windows and peering at locks, trying to find the way home. Trying to find the one perfect door that can take them there, despite everything, despite the unlikeliness of it all.”

When Rini lands in the duck pond behind Eleanor West’s Home for Wayward Children, she is looking for her mother, Sumi. But Sumi was murdered three years earlier, and never found the door back to her Nonsense world to defeat the Queen of Cakes, marry her candy corn farmer, and live happily ever after with their daughter. Rini shouldn’t even exist, and now reality is beginning to catch up with her as she starts to fade away. Quests are strictly forbidden at the school, but can Sumi’s friends really allow her daughter to have never been born?

Beneath the Sugar Sky marks the third installment in Seanan McGuire’s Wayward Children series. The books do not need to be read strictly in order, but the author recommends reading Every Heart a Doorway before this volume. Down Among the Sticks and Bones, being a prequel, can really be read before or after the first book. But since the plot of this novel hinges on a murder that took place in book one, and continues with some characters from that volume, beginning there is suggested.

While Every Heart a Doorway was about the aftermath of returning from a portal world, Beneath the Sugar Sky is a true portal fantasy that involves examining what happens to the worlds the children leave behind when they are pulled back to Earth. When Sumi ceases to exist, the Queen of Cakes is never defeated, and her prophecy goes unfulfilled. This third installment allows us to visit not one but two of the portal realms described in the first book, including Nancy’s Halls of the Dead, and Sumi’s Nonsense world, Confection. The latter is particularly interesting since most of the protagonists themselves visited Logical worlds, and struggle with the rules of a Nonsense realm like Confection.

The adventurers are Kade and Christopher, who will be familiar from Every Heart a Doorway, and Nadya and Cora, who are both girls who visited water worlds. Together, they set out with Rini for the Halls of the Dead, to find out where Sumi’s spirit went when she was murdered, and if there is any way to return her to her world so that Rini will still be born. The central perspective belongs to Cora, who was a mermaid in the world she visited, a world where the size of her body made her a strong swimmer, protected from the cold water, and not the object of mockery from her school mates. Body image forms a central issue for this volume.

In reading this installment of the Wayward Children, I was unexpectedly captured by Confection, though I’m more inherently curious about darker worlds like The Moors, and the Halls of the Dead. But the idea of a somewhat internally consistent Nonsense world was really good fun, and McGuire used it to great advantage. For example, no matter how far apart they are, nowhere in Confection is more than a day’s journey from anywhere else, and McGuire is able to use this to keep the novella-length plot tight. Her prose is as beautiful as ever, and I just let myself roll with the absurdity of the adventure, including a visit to the Oven, the heart of Confection. This universe has developed nicely throughout the series, and while this was the last guaranteed volume, I am hopeful that we might yet be able to look forward to more adventures.

3 thoughts on “Beneath the Sugar Sky (Wayward Children #3)”