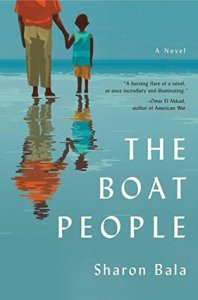 “Certain people felt too rooted, too comfortable. They took it for granted that they deserved to be here more than us. Entitlement closed their hearts.”

Widower Mahindan leaves civil war-torn Sri Lanka dreaming of a new life in Canada for his young son, Sellian, who has already lost his mother and so much else to the conflict between the ruling Sinhalese and the separatist Tamil Tigers. Desperate to escape, Mahindan takes passage for them on an ancient, converted cargo boat, which will smuggle hundreds of refugees across the ocean to the west coast of Canada. But when they land, what awaits them is not a new life, but imprisonment, while Canadian authorities struggle to process the massive influx of refugee claimants, and the public debates whether the boat people should be allowed in at all. His fate, and the fate of his son, will lie in the hands of the Canadian lawyers and adjudicators, each of whom has a story of their own.

I got off to a bit of a rough start with The Boat People, which opens in the midst of an action sequence that lacks any context, and then turns out to be a dream. Fortunately, this passage was relatively short, and the meat of the book proved to be more rewarding than this doubly trite opening. Once I was able to settle into the Sharon Bala’s writing style—which rejects any use of quotation marks or other indications of dialogue, requiring close attention to who is saying what, and whether something is an internal or external monologue—I was drawn into the three main characters, whose personalities and histories ultimately drive the story.

The plot centers on Mahindan, Priya, and Grace, who represent three sides of the immigration question. For his part, Mahindan doesn’t understand the delay in processing his claim. Who would sell everything and spend months in a decrepit boat, leaving behind everything they have ever loved and known, if they didn’t fear for their lives at home? But the government is concerned that terrorists—former Tamil Tigers—may have concealed themselves among the refugees, and the discovery of a cache of unclaimed identity documents aboard the boat only raises further questions. Like everyone, Mahindan has a past in Sri Lanka, a complicated history tied up in civil war, and survival, and through flashbacks, Bala slowly reveals how he finally came to the point of fleeing, and what he had to do to get himself and his son onto that boat. She skillfully builds the character, drawing the reader to empathize with him even as she reveals his complexity.

Disconnected from her heritage, law student Priya Rajasekaran has no interest in immigration law, and resents having to spend her internship defending the refugees just because she is of Tamil descent herself. She barely understands the language, and was discouraged by her parents from getting involved in any cultural group that might mix her up in Tamil politics. But as her internship progresses, she is drawn into the lives of the refugees, and forced to consider anew her own family’s history. Were they really any more deserving of a new life than anyone on the boat, simply because they arrived sooner, while legitimate channels of escape were still open to Sri Lanka’s Tamil minority? And what doesn’t she know about the long, quiet feud between her father and her uncle that was only bridged by her mother’s death? Through Priya, we see the perspective of a second-generation Canadian forced to consider her place in the country she was born into.

Lastly, we have Grace Nakamura, a complex and sometimes infuriating character who has spent her career working for the government in the transportation department. Having recently admitted to her boss that she was bored and burnt out, the Minister of Public Safety granted her a three year appointment as a refugee adjudicator. With no training or background in immigration law, Grace is in over her head, and under intense political pressure from her former boss, but she has to learn to swim quickly when five hundred new cases land on the docket. A third generation Japanese-Canadian, Grace is largely disconnected from her Japanese roots, but as her mother descends into dementia, she lives more and more in the past, becoming obsessed with the Japanese internment, and the loss of their homes and livelihoods in Vancouver. Grace wishes to continue ignoring this past, as her family has always done, but her fourth generation, thoroughly Canadianized teenage twin daughters engage in this journey with their grandmother.

I think the major problem for many readers with The Boat People will be the ending. After spending months in detention, and failing repeatedly to win parole while his case is decided, Mahindan finally goes to the hearing that will decide his fate. He has been separated from his young son for months, as the case drags through the immigration court, and Sellian has been living with white strangers who do not even speak his language. But Sharon Bala makes the choice to leave the ending open, forcing the reader to face the many possibilities. We know how we hope it will go, and we know how we fear it will go, and the open ending forces the reader to confront the idea that Canada can be both the country of refuge we hope for, and the place of rejection and insularity that we fear.

The Boat People was defended in this year’s Canada Reads competition by singer and television host Mozhdah Jamalzadah, herself a refugee who came to Canada at the age of five. The theme for this year’s competition is “One Book to Open Your Eyes,” and in her opening argument, Jamalzadah highlighted the fact that the world is currently in the midst of the worst refugee crisis in history, a line of argument that Clara Hughes successfully used back in 2016 to shepherd The Illegal by Lawrence Hill to victory. Jamalzadah argued that Bala’s novel transforms the refugee crisis into more than numbers on the news, provides a human face, and encourages us to open our doors to fellow human beings who have lost everything.

Host Ali Hassan addressed one question to each book on the opening day of debates, and The Boat People was first up for discussion. He asked the panelists to discuss whether the narrative effectively showed the humanity of refugees and encouraged the reader to see them differently, as Jamalzadah had argued in her opening. Jeanne Beker, defender of Forgiveness by Mark Sakamoto, raised the dissatisfying ending. Jully Black, defender of The Marrow Thieves by Cherie Dimaline, was put off by the multiple characters and narratives that the story followed. Greg Johnson, defender of Precious Cargo by Craig Davidson, also took issue with the open ended conclusion of the book. Tahmoh Penikett, defender of American War by Omar El Akkad, spoke only positively, citing the multiple relatable perspectives that would help connect the book with many different readers.

When it came time to vote, The Marrow Thieves, Precious Cargo, and American War each received one vote against, from Mozhdah Jamalzadah, Tahmoh Penikett, and Jeanne Beker, respectively. All the panelists cited the decision as being very difficult, and only Forgiveness by Mark Sakamoto received no votes against it on the first day. Both Craig Johnson and Jully Black voted against The Boat People, making it the first book to be eliminated from Canada Reads 2018.

___
You can follow the Canada Reads debates on CBC. Find out how to tune in.