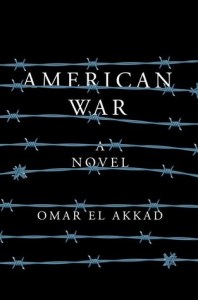 “If we nod and smile while they parade some fantasy about this being a noble disagreement between equals and not a bloody fight over their stubborn commitment to a ruinous fuel, the war will never really be over…You fight the war with guns, you fight the peace with stories.”

Sarat Chestnut is born by the sea, into contested territory between the Reds and Blues that are fighting the Second American Civil War. Her world is wracked by climate change, and by the South’s refusal to give up on fossil fuels. Much of the Southern US coast is now underwater, and out-of-control drones crawl the skies. When her father is killed in a bombing, Sarat’s mother and her three children flee to Camp Patience, a refugee camp on the North/South border. There they scrape together a life always on the edge of dissolution, and the children grow up with the question of what the future can possibly hold for them. It is here that Sarat meets the mentor who will shape her mind, and turn her to his own ends.

In American War, journalist Omar El Akkad paints a dark dystopian future in which the unreconciled shadows of America’s past rise up to tear the country apart once more. His protagonist begins as a child caught in the middle of that fight, and is irrevocably twisted and shaped by the horrors of war. We follow Sarat as she goes from refugee to fighter to war hero to wanted terrorist, perceptions of her swaying and turning depending from which side of the conflict she is being seen. We see her broken and remade, and broken again, and must inevitably follow her to the consequences of that final breaking. She is not a likeable character, and the reader is not necessarily supposed to sympathize with her actions, but it the author’s quest to make us understand her nevertheless.

American War is told with a frame narrative. It is many years after the Second American Civil War, and the Reunification Plague that followed it. In the far north of the Alaska Neutral Territory, someone who remembers Sarat, who knows who she was, and what she did, is dying. For so long the secret has been kept, but now the story will be told. Also interspersed through the book, at the end of each chapter, are documents that assist the massive feat of world-building that El Akkad has undertaken. The story covers a large swath of time, with a lot of alternate history that needs to be explained, and these excerpts help support that, but are inserted at natural breaking points rather than dumped into the main body of the text.

Although American War was extremely well conceived and written, there were three parts that stuck out which were difficult for me to reconcile. I was able to cope with the darkness of the book, but somehow I couldn’t handle the scene where a boy spying on Sarat in the shower was supposed to make her feel powerful. Fortunately this scene did not devolve into a sexual assault, but it was still a moment of exploitation, and unlike other such moments, the author chose to spin this one as empowering. Next, there was Sarat’s distaste for her disabled brother, who sustains a traumatic brain injury in the course of the book. Her love for her family is supposed to be one of Sarat’s only redeeming qualities, so this felt somewhat incongruous. Most of all however, I struggled with El Akkad’s choice to create a queer, black, female terrorist as the protagonist of his book, when so often these are the people we see become the victims of terrorism. The author failed to meaningfully engage with how these aspects of her identity might have interacted with her experiences to shape her trajectory.

American War was defended in this year’s Canada Reads debates by actor Tahmoh Penikett, who is best known for his work in science fiction television. In his opening arguments, Penikett posited American War as a novel that addresses a crisis of empathy in our society. Going into the finale, he asked his fellow panelists to be open to hearing the hard truths of this book, because listening is essential in order to find compassion and make healing possible.

Over the course of the week, the darkness of American War was repeatedly pitted against the themes of hope in Forgiveness and The Marrow Thieves, and the humour and levity of Precious Cargo. Greg Johnson in particular was adamant in his argument that the world is not as dark a place as it is painted in this novel, and Jeanne Beker was right there with him, having effectively used this argument against The Marrow Thieves as well. American War was voted against at least once every day of the debates, survived a tie breaker on Day Two, and received two more strikes on Day Three. By contrast, going into Day Four, not one panelist had cast a ballot against Forgiveness by Mark Sakamoto, making it evident that while American War was going to the finale, it would have a tough fight to win Canada Reads 2018.

One thing the panelists did find particularly effective about American War was the role reversal of empires. America has fallen into the civil war-torn state we see on the news of many other countries, while the Bouazizi Empire has risen in North Africa and the Middle East, to fill the role America once held in the world. The Empire and China now send aid ships to America. Mozhdah Jamalzadah spoke eloquently to this on Day Two, pointing out how this was effective against the North American tendency to block out what is going on in the rest of the world. Tahmoh Penikett continued to amplify this line of argument, suggesting that the book is so effective because it is set in our backyard. Occasionally, a panelist would try to raise the American-ness of the book as a strike against it, but this argument never gained much traction or serious debate. Darkness and revenge were the main sticking points.

The final day of debates focused on finding elements of the eliminated books in the remaining contenders, a persuasive line of attack given that the three free agents decide the competition. Tahmoh Penikett appealed to Mozhdah Jamalzadah, arguing that the refugee crisis of The Boat People is also represented in Sarat’s story. Jeanne Beker tried to relate Forgiveness to The Marrow Thieves, arguing that its message of learning from our elders and moving forward with an eye on the past was represented in her book as well. All of the remaining panelists were also asked to say what they liked about the remaining books. Tahmoh Penikett said he personally related to Mark Sakamoto’s description of loving someone who is struggling with alcoholism. Jeanne Beker praised Omar El Akkad’s writing, and his visual, cinematic style.

Check back tomorrow for my review of the winner of Canada Reads 2018! Meanwhile, you can catch up on my recaps, or tune into to replays on CBC.