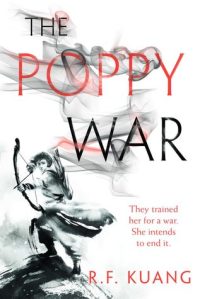 Disclaimer: I received a free copy of this book from the publisher.

“The Keju is a ruse to keep uneducated peasants right where they’ve always been. You slip past the Keju, they’ll find a way to expel you anyway. The Keju keeps the lower classes sedated. It keeps us dreaming. It’s not a ladder for mobility; it’s a way to keep people like me exactly where they were born. The Keju is a drug.”

Rin is a war orphan, being raised by the Fang family only because the government has mandated that families adopt such children, and because they find it convenient to use her to help them in their drug smuggling business. Living in the deep rural south of the Nikara Empire, Rin dreams of passing the Keju exam, and traveling north to study at one of the empire’s elite schools. But when her hard work pays off and she tests into Sinegard, the top military academy in the country, Rin discovers that her trials are only beginning. Sinegard’s military and political elite have little time or sympathy for a dark-skinned peasant girl from the south. Desperate to prove herself, Rin unlocks a supposedly mythical power that enables her to summon the strength of the gods. Even as she is further alienated from her teachers and classmates, she becomes the protégé of an eccentric master who has taken no other apprentices from her class. But Master Jiang wants Rin to learn to control and suppress her abilities, while Rin dreams of wielding them in battle for the glory of the Empire. And with the Empire constantly on the brink of the next war with the Mugen Federation, it becomes increasingly difficult to heed her Master’s advice and resist the call of the Phoenix, god of fire and vengeance.

Rin starts off as a grey protagonist who is driven hard by ambition and misplaced loyalty. I was reminded of the way we watched the development of Adelina Amouterou in Marie Lu’s The Young Elites series. However, I think it is important to note that in spite of the age of the protagonist, in tone, pacing, and subject matter, The Poppy War is a decidedly adult fantasy novel that deals with war, substance abuse, rape, genocide, and intergenerational trauma, to name a few. Although her character develops to an increasingly dark place, early in the book, I found Rin very appealing. She is independent, ambitious, and irreverent, and she doesn’t care about customs or social roles. The Fangs plan to marry her off to a local official several times her age so that he will look the other way when it comes to their opium smuggling business. Her reaction is “fuck the heavenly order of things. If getting married to a gross old man was her preordained role on this earth, then Rin was determined to rewrite it.” However, she quickly developed into a person who worried me. She burns herself to stay awake when studying for the Keju, leaving herself scarred. And when she arrives in Sinegard and finds her studies imperiled by menarche, she decides to have her reproductive organs medically destroyed. In short, she is a terrifying badass. I admired her rejection of social norms, even as I was terrified of what she was going to grow up into. While I described her as a grey protagonist above, I think it is safe to say that the grey will be pretty black by the end of this planned trilogy. In fact, the transformation is arguably in place by the end of the third act, when Rin refuses to apologize or abdicate responsibility for her actions in the war.

The Poppy War’s narrative is divided into three acts. Part I is Rin’s origin story, and covers her studying for the Keju and her time at Sinegard. Although there are parts of this section that are hardcore, as mentioned above, it is the most youthful part of the narrative, and mirrors many of the familiar traditions of the magical boarding school setting, including trials, rivalries, and unexpected friendships. However, Part II sees the arrival of a long-awaited war, and the students of Sinegard, no longer children, are drafted into the war effort. Rin is once again cast adrift, and must find her place in the Empire’s military, a milieu in many ways more daunting than even elitist Sinegard. There are some lengthy descriptions of military sieges and tactics that would generally not be in my wheelhouse, but I liked the way Kuang was using these elements to explore politics, history, and the implications of war, not just wallow in war itself. In fact, one of the most important battles (see Chapter 21) is described only by its aftermath, in a way that is somehow both understated and horrifying. These choices continued to keep me with the book despite the increasing military focus.

Debut author Rebecca Kuang studied Chinese history at Georgetown, and in the same week that she was celebrating her debut novel, she was tweeting about completing her honours thesis on the 1937 Nanjing Massacre. The Poppy War draws deeply on that knowledge, with a fantasy twist that introduces ancient gods, and the remaining few who are able to draw on their power at a terrible price. Kuang cleverly insinuates much of her history and world-building as Rin studies for the Keju, and has to master many of these subjects for herself. To the extent that The Poppy War is a dark fantasy, it is a merely a dark reflection of the history that Kuang is drawing on. And with the fantasy genre awash in European history inspired fantasies, dark and otherwise, I think it is safe to say we could use a few more like Kuang’s that are inspired by and centered on other parts of the world.

5 thoughts on “The Poppy War”