Each summer my book club goes on break, as members scatter to the four winds for visits and vacations. But being too busy to meet isn’t the same thing as too busy to read. So here’s this year’s list of suggestions for my book club members looking for something to read over the hiatus. September will be here before you know it! Click the headlines for links to full length reviews where applicable.

Bianca Bosker had a successful career as a technology journalist when she became fascinated with the world of wine, and blind taste testing in particular. How could expert tasters identify the grape, vintage, and even the vineyard of what they were drinking, without ever seeing the bottle? Cork Dork is the story of the eighteen months she spent following this obsession, quitting her job as a journalist in order to study to become a certified sommelier, while also interviewing vintners, sommeliers, chemists, and collectors. But the rubber really hits the road in Cork Dork when Bosker tries to make her way into the restaurant industry armed with her freshly polished but highly theoretical knowledge of wine and wine service, with often humourous results.

The Other Alcott by Elise Hooper

Fans of Louisa May Alcott’s Little Women will already be aware that the much beloved children’s story was loosely based on the Alcott sisters’ childhood. The Other Alcott follows Louisa’s youngest sister, May, who lives under the shadow of her fame as the inspiration for the much-hated Amy March. May aspired to be an artist, and illustrated the first edition of Little Women. But while her sister’s novel was a critical success, May’s illustrations were panned. If Jo is the rough but shining favourite of Little Women, then The Other Alcott tries to imagine what it would be like to be the youngest sister of the person who penned this fictionalized version of herself. The Other Alcott follows May into Europe’s art scene at a fascinating period when the Impressionists were beginning to rock the French art establishment with their radical ideas, and more women were finding ways to formally study art.

In this humourous collection of essays, Scaachi Koul vividly sketches a portrait of her Kashmiri immigrant family, including her parents, much older brother, and young niece. Her father in particular is a vivid character, the kind of person who will decide a year later that he isn’t done being mad at you about something you did that he didn’t approve of, and abruptly stop talking to you for months at time. The inter-generational conflict is at once unique to her situation, and recognizable to parents and children everywhere. With a deft hand, Koul combines funny family stories with insightful cultural commentary about growing up as first generation Canadian in an immigrant family.

The Jane Austen Project by Kathleen A. Flynn

When Rachel Katzman and Liam Finucane arrive in England in 1815, it is by unusual means, and with an even more unusual mission. Sent back in time from a somewhat dystopian near-future, they are charged with identifying the cause of Jane Austen’s untimely demise in 1817 at the young age of 41, and with recovering and bringing back her lost manuscript of The Watsons. This top-secret mission is known as The Jane Austen Project, and it has one very important rule; they must change the future as little as possible while achieving their objectives, or risk being stranded in Regency England forever. With this highly unusual premise, copy editor and ardent Austenite Kathleen A. Flynn has captured something of Austen’s tone and pacing, without trying to entirely mimic her style. Highly recommended for fans of time travel fiction that is more about the destination than the science of such an endeavour.

Love, Loss, and What We Ate by Padma Lakshmi

Padma Lakshmi has had a varied career. In her twenties she was a model, and then a television host and actress. She published a cookbook about what she ate to lose weight after a movie role required her to put on twenty pounds, and as a result made the improbable transition from model to foodie, co-hosting the popular cooking competition Top Chef. Love, Loss, and What We Ate is a chronicle of the role food has played in her life, through times of love, and times of loss, and how she navigated the jump from a career that was based on her looks to one that engaged her heart and her mind. From a childhood in India, to an early adulthood spent traveling Europe, to a second career in America, she shows how food can be a source of comfort, a connection to identity, and an occasion to examine our biases about beauty.

Love and Other Consolation Prizes by Jamie Ford

Local author Jamie Ford’s third historical novel is set in Seattle during the 1909 Alaska Yukon Pacific Exposition. Ford opens on the better remembered 1962 fair, and uses it to echo and reflect the main action of 1909. The plot was inspired by a fascinating newspaper clipping from the AYP Expo, advertising the fact that an orphan boy was one of the raffle prizes at the fair. The fate of the real boy is unknown, but in his novel, Ford imagines what might have become of a young half-Chinese boy named Ernest, whose winning ticket is sold to the madam of an infamous brothel. Raised in a Catholic orphanage, Ernest comes to the red light district as the temperance movement is surging in the city, and finds himself caught between the Japanese house girl, Fahn, and Madam Flora’s stubborn daughter, Maisie. Through fiction, Ford explores the history of the city.

The Attention Merchants by Tim Wu

So much of the web is free, at least in terms of money paid by the users who access its vast array of content. From eyeballs on ads, to time on site, these are the metrics that the tech industry thrives on, as free-of-charge enterprises find ways to monetize. Wu explores the attention economy, and how we pay for all this free content with our time, and our personal information. Through the history of advertising, this book explores how we got to the present state of the advertising industry, and how it is morphing to adapt to our new technologies.

Four young medical school students start out on the road to becoming doctors, sure of their nobility of purpose and their calling, the real and trying rigours of the medical profession still ahead of them. Ming, Fitz, Sri, and Chen come from different backgrounds and have different career paths awaiting them. In a series of twelve interlinked short stories, Dr. Vincent Lam takes the reader behind the scenes of the medical world, from medical school to residency to the emergency room and the operating room. Lam’s characters are complicated and flawed, fallible humans who have been trusted with unthinkable responsibility, and faced with terrible dilemmas. This adds depth to the rich detail of the author’s own medical experience, making for an intriguing collection. 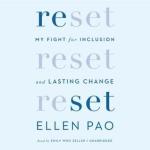 Get a glimpse into the boy’s club that powers the venture capital world funding today’s hottest tech start ups, and your favourite websites. Ellen Pao speaks up about her experience as an Asian American woman in this cliquey world, and offers her insights into why Silicon Valley’s diversity initiatives have failed. Going beyond the “pipeline problem,” Pao examines why women who made it through school and into lucrative careers later drop out of tech jobs in astonishing numbers, and what it would take to reset the industry culture so that everyone can thrive.