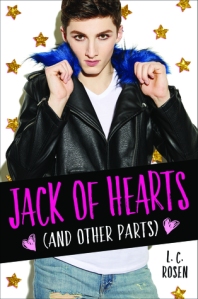 Disclaimer: I received a free review copy of this title from the publisher at ALA Annual 2018.

“My sex life has always been out there, talked about, but now I’m talking about it, too. I don’t know if it’s just going to make the rumors and stories worse. I want to douse the fire, not throw gasoline on it.”

Jack Rothman is an out and proud gay white boy in liberal New York City, attending an elite private school. He knows he has it easy compared to gay kids in rural areas, or even compared to his best friend Ben, who is black and fat, in addition to being gay. But his ostensibly liberal school doesn’t quite know how to handle Jack, a boy who wears make up and has a reputation for sleeping around. So when Jack decides to lean into his reputation, and starts writing a sex and relationship advice column for his friend Jenna’s website, it is no surprise when the administration is displeased. But the sex advice column also prompts a turn for the disturbing, when a secret admirer begins leaving creepy notes in Jack’s locker. Soon stalking turns to blackmail, as the letter writer tries to force Jack back into the closet and curb his sexual behaviour. With no help from the school administration, it is up to Jack and his friends to figure out who is blackmailing him before his stalker gets what they want.

Jack is refreshing character in that his coming out is long behind him. He has friends both gay and straight, and a supportive if somewhat harried single mother. But the world he lives in has certain ideas about how gay people should behave, as exemplified in the character of Jeremy, President of the school GSA, and Jack’s first boyfriend, who is constantly striving after the straight ideal of masculinity in everything except who he dates. Jack’s refusal to be bound by these strictures results in him becoming the object of gossip in his school, where everyone feels free to talk about his sexual exploits, and even make up stories about him. In this respect, Rosen’s fun YA mystery full of parties and teen romance is also a serious conversation about the ways straight people, including young women, objectify gay men for their own pleasure or entertainment.

As a fan of the advice column format, I loved the way Rosen incorporated the Jack of Hearts letters into the story, posing them as advice, commentary, and even plot development in various scenarios, while also reinforcing the book’s emphatically sex-positive tone. Jack, of course, gives remarkably good, carefully crafted advice for a seventeen-year old, coming across as mature and worldly. But these character traits also prove complicated burdens as he tries to solve the problem of his stalker without involving the police, or his mom. As the harassment intensifies, he even begins to pull away from his friends, believing that he can solve everything himself, without worrying anyone else, and it is this belief that takes the book to its darkest place. Although I figured out who Jack’s stalker was early in the book, the intensifying situation still managed to hold me on edge until the very end.

If there was one place Jack of Hearts fell down for me, it was in the relatively abrupt wrap-up, after the stalker is revealed. I couldn’t help but feel that the implications of what Jack and his friends went through were overlooked for a simplistic conclusion. The result is a weirdly anti-climactic let down from an intense situation. After the deliberate intention and care with which the author addressed complex issues like consent and homophobia, this breezy conclusion to a legitimately traumatic experience felt out of place. With a more developed conclusion, this book would have been a real stand-out.

3 thoughts on “Jack of Hearts (And Other Parts)”