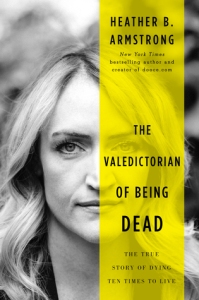 by Heather B. Armstrong

“When you want to be dead, there’s nothing quite like being dead.”

With the tag line “Our lady of perpetual depression” Heather B. Armstrong has documented her mental health struggles over the years on her dooce blog, mixed in with stories about her life and family, leaving Mormonism while living in Utah, and becoming one of the internet’s first professional bloggers (and getting fired from her day job as a result). In more recent years, she has shared her divorce, and raising her two daughters alone, and even semi-retired from blogging due to the changing nature of sponsorship, and the increasing demands of influencer marketing. The Valedictorian of Being Dead recounts her most recent bout of severe depression, and the experimental treatment she underwent to try to reset her brain. Ten times over three weeks, doctors used propofol anesthesia—yes, the Michael Jackson drug—to induce a coma-like state, reducing brain activity to the bare minimum before bringing her back up in an effort to gain the benefits of electroconvulsive therapy without the negative side effects. For Armstrong, the treatment was life changing.

Given that she was one of the internet’s first big bloggers, it probably isn’t surprising that the first blog I ever followed was Heather B. Armstrong’s dooce blog, way back in the day before she was even a mom, let alone a “mommy blogger.” However, I fell off with reading somewhere along the way, probably because the increased focus on parenting wasn’t particularly interesting to a college student. So when I saw her memoir at ALA, I thought it would be cool to catch up. And indeed, I was pulled right back into what I enjoyed about her writing style, which is energetic, descriptive, and often darkly funny. “When she told me about my dazzling performance, I reminded her that when I want to do something well, I become the valedictorian of doing that thing. No one does dead better,” she writes after her mother describes witnessing her first descent into the abyss. She is equally adept at evoking the depths of depression, and the alien feeling of her own body while in that state.

Armstrong is accompanied on her journey by her mother, who takes her to every treatment, and has to watch her child sink down into near-death ten times. While Armstrong remembers nothing, her mother has to watch the doctors grab her daughter’s almost lifeless body, and intubate her as quickly as possible so that she is not deprived of oxygen. Their supportive relationship was particularly poignant to me with the knowledge that Armstrong’s departure from the Mormon faith had strained her family relationships. There are a lot of affecting scenes in the book, but the one that really choked me up was when she describes how her mother once very matter-of-factly told her that their relationship would never be the same again without Jesus. This coldness is quite the opposite of the relationship that is illustrated in this book.

While Armstrong writes forthrightly about her mother and stepfather, and how they shared in this experience with her, she is more circumspect in the way she writes around her ex-husband, and about her father. Her ex is chiefly present in her fear of losing her children. In fact, the reason she let her depression go on so long, and get so bad without treatment, was because she was afraid he would find out how sick she was, and take her daughters away. Her relationship with her father is also fraught, and she had not intended to share the experimental treatment with him until her mother requested that she do so. There is a lot going on beneath the surface of these two relationships that is not deeply delved into, and yet the story is significantly shaped by their absence.

While the body of the text is written by Armstrong, and focuses on her personal experience, the afterword is by the doctor who led the study. While he is hopeful and excited by the preliminary work his team has done, he brings the necessary emphasis that this still an experimental treatment in need of further investigation. It balances Armstrong’s personal experience of success with the need for additional study in order to better understand how and why such a treatment might be successful, or what its limitations might be. Altogether, it is a fascinating account of one woman’s mental health struggles, and how they might intersect with treatment and acceptance more broadly.

Brain on Fire by Susannah Cahalan

2 thoughts on “The Valedictorian of Being Dead”