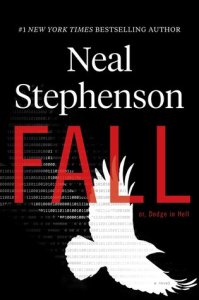 “She began to feel that the tech industry, which prided itself on having disrupted so many other things, was now creeping up on the moment when it would attempt to disrupt death.”

When wealthy businessman Richard “Dodge” Forthrast dies on the operating table during what was supposed to have been a routine operation, his family discovers that a decade earlier, he made out a highly unusual will, bequeathing his body to science with the understanding that it should be preserved until such time as his brain can be digitized and uploaded. In the intervening time, his Corporation 9592 has made a vast fortune, and his death establishes a highly-endowed foundation charged with helping bring this future to pass. His will also binds his fate together with the machinations of the eccentric billionaire Elmo Shepherd, who has his own ideas about the digital afterlife. As years pass in Meatspace, an elaborate structure of shell companies, foundations, and quasi-religious movements grow up around supporting Bitworld, with Dodge’s niece Zula, her daughter Sophia, and his friend and former colleague Corvallis Kawasaki caught up the labyrinthine consequences of Richard Forthrast’s last will and testament.

You probably need to be an author as established and respected in the genre as Neal Stephenson to get away with writing a book like this. It is nearly 900 pages long, and begins with the protagonist waking up, and spending a good several pages pondering the concept of consciousness. It then goes on to pull in mythology, theology, philosophy, and literature, all while toggling between science fiction tropes and high fantasy quests, through an ever-shifting cast of point-of-view characters. After teeing off the action with his death in the opening chapters, Dodge himself disappears from the narrative for nearly three-hundred pages. Stephenson is also the author of a trilogy known collectively as The Baroque Cycle, and baroque is certainly a term that is applicable here as well.

After Dodge’s death, the narrative is handed over to Corvallis, aka C-Plus, who has been named the executor of his friend’s will. It is up to him to help Zula and the rest of the Forthrast family navigate the bizarre ramifications of Dodge’s forgotten desire to live forever in bits and pixels. Meanwhile, C-Plus is caught up in the largest internet conspiracy ever executed, one he believes, but cannot prove, to have been masterminded by El Shepherd for reasons unknown. The baton then passes to Sophia, now grown into a college student, and planning to spend her summer as an intern at the Forthrast Family Foundation, working on the problem of DB or Dodge’s Brain. But first she must make the trek across the post-truth America created by El’s Moab Hoax. These three hundred pages set the stage for the creation of Bitworld.

When Dodge’s Brain is finally digitized, uploaded, and switched on, Fall becomes focused upon literal world-building. Existing mythology meets new creation story as the being who calls himself Egdod achieves consciousness and begins to give shape to the Land. The language also shifts accordingly, as Stephenson’s style becomes more formal, adopting the tone and cadence of mythology. Egdod cannot quite recall before, and indeed it takes him some time to remember that there was a before, but the world he is shaping around him nevertheless begins to bear a distinct resemblance to the imperfect one he left behind. For a time, he is the god of his own universe, but out in Meatspace, once it becomes apparent that the simulation is live, soon many more souls are clamouring to be scanned and uploaded when they meet their end. At first, those left behind can only see what is being created in terms of computational resources consumed, but with the invention of the Landform Visualization Utility, soon watching the goings-on in The Land becomes the primary form of entertainment for those on the original plane of existence. And not everyone there likes what they are seeing, or believes it is how the afterlife should look.

In general, I was more interested in the events back in the “real” world, rather than the development of The Land. The end of death as we know it has profound effects on Meatspace, not all of which Stephenson takes the time to fully explore. But Fall is working on a long time-scale, so as the story progresses, many of the characters that began in one realm cross over into the other.  The resulting story is a strange brew of mythology and scripture, meandering at times, and engrossing at others. Fall has distinct biblical influences, pulling in the Tower of Babel and Adam and Eve, but also draws significantly upon Greek mythology, and the rivalry of the gods. The physical edition is adorned with Gustave Doré end-papers, and Milton’s Paradise Lost is also heavily in the mix. An altogether curious journey.