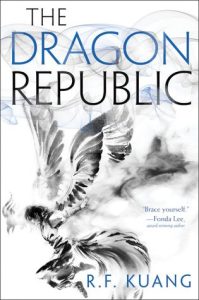 “She had too much power now, too much rage, and she needed a cause for which to burn. Vaisra’s Republic was her anchor. Without that, she’d be lost, drifting.”

Having called down the power of the fire god known as the Phoenix to destroy the islands of the Mugen Federation, Runin “Rin” Fang and the remaining Cike take refuge in the southern port city of Ankhiluun. In order to gather the resources they need to take their revenge for the betrayal of Nikaran Empresss Su Daji, the Cike take on a series of assassinations for Moag, the opium pirate queen of Ankhiluun. Grappling with the consequences of her actions, her involvement in Altan’s death, and her new responsibility for the Cike, Rin turns increasingly to opium to dampen the whispers of the god of fire and vengeance. Her mission to assassinate the Empress is the only thing giving her purpose, but to do so she will need to make common cause with Yin Vaisra, the Dragon Warlord, and father of her old school rival, Nezha. Vaisra promises a democratic republic that will usher in a new age of prosperity for Nikara, but when the other warlords refuse to join him, he turns to Hesperia for help.

In trying to cope with the consequences of her actions, Rin is spiraling into deep self-hatred. The atrocity she committed against the Mugen people weighs heavily, and she tries to sooth it with a variety of methods, from self-harm, to opiates, to pledging to commit various acts of atonement. Rin’s past actions are at once monstrous, and understandable, and her reaction is entirely human, if deeply disturbing. Her power means that it is a profoundly dangerous thing for someone like her to be so angry and emotionally vulnerable. Having gone dark at the end of The Poppy War, it is painful to watch her try to flail back towards the surface, even as circumstances around her continue to deteriorate, and Nikara plunges into civil war.

Despite Rin’s shifting allegiances throughout the book, her ultimate enemy remains the Empress, Su Daji. While Rin’s flawed humanity has never been in doubt, the Empress has been something of a distant, all-powerful villain. In The Dragon Republic, we gain a few closer glimpses at the woman who rules Nikara, as well as a peek into her past, when Rin encounters the Ketreyids, a nomadic people who live along the northern borders of the empire, and who can communicate mind to mind. Their leader is able to show Rin the young woman known as the Vipress who would go on to become the sole ruler of Nikara. Though Rin cannot see the similarities between herself and Daji, the Empress sees them all too clearly, recognizing both the threat and the promise of the last Speerly. Each face-to-face encounter with Daji proves critical as Rin questions what the future holds for her, and for Nikara.

Another character who comes further into focus in this second installment is Yin Nezha, Rin’s former rival and Sinegard classmate. The two made peace when the country went to war with the Mugen Federation, and all the students of Sinegard military academy were called up to serve. The two share an uneasy attraction, but their differences and their trauma make it hard for their feelings to come to fruition. In joining his father’s faction, Rin gains further insight into the power and privilege with which he was raised, as well as the secrets the family has been hiding beneath a carefully polished public exterior. His mother, the Lady Saikhara, has deep ties to Hesperia, as well as the missionaries of the Grey Company who believe that shamans are manifestation of Chaos incarnate. While The Poppy War focused on the conflict between Mugen and Nikara, with The Dragon Republic attention begins to turn back towards the old wounds left by Hesperia’s imperialist ambitions.

The Dragon Republic brings all the strengths of The Poppy War, and continues to combine 20th century Chinese history with the best conventions of dark fantasy, taking the series to new highs as Rin continues to fight for her future, and try to figure out how best to wield her power for the good of Nikara, despite terrible trauma and impossible choices.

3 thoughts on “The Dragon Republic (The Poppy War #2)”