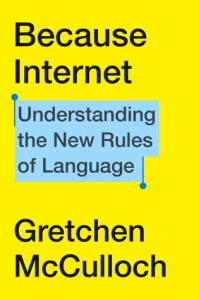 “Whatever else is changing for good or bad in the world, the continued evolution of language is neither the solution to all our problems, nor the cause of them. It simply is. You never truly step in the same English twice.”

Canadian internet linguist Gretchen McCulloch studies the informal written English that has grown up around our use of the internet, as well as text messaging and chat services. Because Internet covers a lot of ground, from typographical methods of conveying tone of voice, to emoji as gesture, to the evolution of memes, and the centuries-long quest for sarcasm punctuation. Her study focuses predominantly on English, with occasional examples from other languages and cultures. Taking a broad view, McCulloch surveys the origins and precursors of how informal written language has evolved since took to the web, and will continue to develop as new generations make their own changes and additions to the lexicon.

Because Internet is a prescriptivist’s nightmare; McCulloch is less interested in how we should use language, than in describing how our use of the written word has evolved to help us communicate over the internet, and through other forms of technological mediation. As she points out, “standard language and correct spelling are collective agreements, not eternal truths.” She notes that the fact that young women lead linguistic change is so well established as to be an unremarkable state of affairs in linguistic circles. But it also likely helps explain why such changes are so heavily derided; young women are rarely taken seriously. However, McCulloch approaches her study with the same attention and rigour usually devoted to more formalized texts.

One of the most interesting sections of the book covers the evolution of emoticons and emoji to facilitate text-based communication. McCulloch contends that they serve the purpose of mitigating a feature that is both a strength and weakness of writing—it is disembodied. The disadvantage becomes evident “when it comes to representing emotions and other mental states.” What is stunning is that over time, “a couple billion internet users had subconsciously, collectively, and spontaneously” mapped the functions of embodied gestures and facial expressions on the capacity for text or image-based icons to convey those missing nuances.

McCulloch also maps some subtle changes in the way we use punctuation. In informal writing, terminal periods have begun to disappear, to the point that younger people will sometimes read a period as passive aggressive. Falling somewhere in between the two age groups, I looked at my own text messaging history and realized that, indeed, my terminal periods had largely disappeared. I would end a sentence with a question mark or an exclamation point, but if the final punctuation mark would have been a period, I generally left it off and simply sent the message. Similarly, different generations use ellipses in different ways. While older people will use the … as a connector between thoughts, younger people will tend to read in hesitance, or omission, and wonder what isn’t being said.

In a guest post on Whatever, McCulloch explains that she decided to write to the reader of the future. So if you are what McCulloch calls a current “Full Internet Person,” certain explanations will probably feel unnecessary, but as time passes this context will become more important for everyone, just as it is currently useful for “Semi Internet People” who don’t live and breathe memes, and aren’t on the cutting edge of every social media trend. This approach does make for some sections that feel a bit overwritten for the current reader, but the current reader is only current for this fleeting moment in time. Because Internet captures the early linguistic evolution of informal writing on the internet.

3 thoughts on “Because Internet”