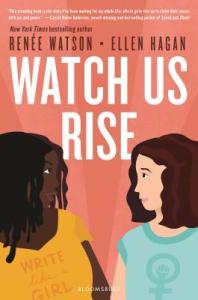 by Renée Watson and Ellen Hagan

“This has to be about bringing women’s voices to the forefront. This has to be about speaking up and not allowing your voices to be silenced… It has to be bigger than your anger or disappointment at one or two people. This isn’t only personal. It’s about every girl everywhere. And if you only make it about your school, your club, you make it small.”

Jasmine and Chelsea are best friends who attend a progressive, social justice oriented high school in Washington Heights. But despite their school’s liberal ideology, the girls still face sexism and racism on a regular basis, from the casting of school plays, to the limited selection of poets they are assigned to read.  Every student is required to be in a club, but when they become fed up with the microagressions they face in their current after school activities, Jasmine and Chelsea decide to start their own group, focusing on women’s rights and voices. But when their blog becomes unexpectedly popular, they face pushback from some of their peers, as well as the school administration, and they will have to find the courage to keep raising their voices and fight for change.

Although this book started slow, and could be a bit didactic at times, the two best friends are full of a righteous, youthful fury that felt familiar and authentic. Jasmine is thoughtful, and good at strategically positioning their ideas in a way that makes adults listen to them, while Chelsea is a little bit more unbridled and forthright about her dissatisfaction. Together they make a good balance. Jasmine is also struggling with her father’s slow decline from cancer, while Chelsea is facing the reality that the personal is political when she has to figure out how to deal with a crush on a boy who has a girlfriend, yet seems to return her feelings. Can she be a feminist, and like someone who is unavailable, or is she betraying her values?

The two best friends have one another’s backs, and are strong allies, but their friendship is not without some of its own turmoil. Jasmine is caught in the crux of feeling simultaneously invisible and hypervisible. Her blackness is often noted or remarked upon, yet somehow, her fatness is used to render her invisible, and ignored. Even her best friend doesn’t consider it when they go out shopping together, and Jasmine can’t try anything on in the stores Chelsea likes, or when they order t-shirts for a protest they are planning, and Chelsea fails to consider that the shirts she has chosen doesn’t come in a large enough women’s size for Jasmine to wear. However, I appreciated the fact that their differences weren’t played for petty drama, but rather were something for them to work through in order to become closer, and understand one another better.

I think I related to this book quite strongly because when I was in high school, a group of friends and I tried to start a gay-straight alliance. This would have been the early 2000s, and gay marriage was recently legalized in my home province of British Columbia, but was still the subject of national debate. Nation-wide legalization was still a year or two away. The school told us that a GSA was too specific, and not inclusive enough. Not knowing any better at the time, we agreed to a “Diversity Club” instead. I wish we’d had a fraction of the knowledge or resources these girls have in their community, from supportive parents, to understanding teachers, to a local anarchist feminist book store. We didn’t know that we should have pushed back harder, much less how to go about it. Watch Us Rise specifically shows teens not just figuring out what they believe in, but how to live it, and fight for it.

The chapters in Watch Us Rise are told from alternating points of view, and often end with essays, blog posts, and poems. Sometimes only one or two, but sometimes several pages, including reproducing the likes, shares, comments, and reblogs of the post. I think this is the element of the book where people will probably differ in their level of enjoyment or connection. I enjoyed the occasional selection, but struggled when it went on for too long, as I wanted to get back to the plot. Honestly, I might also have struggled with the earnestness of this story when I was a teen, having been strongly prone to sarcasm and cynicism, but there are elements of this book I could have used then nevertheless, and find valuable now.

One thought on “Watch Us Rise”