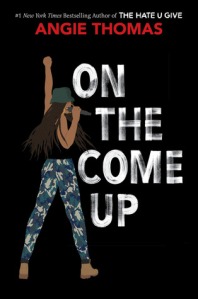 “Ever since that boy got killed, my heart races whenever I see a cop. I could’ve been him, he could’ve been me. Luck’s the only thing that separated us.”

Bri Jackson is Garden Heights royalty, thanks to her father, the late great rapper Law, whose star was rising when was gunned down when she was four. Bri dreams of being a rapper, but she wants to stand on her own feet. After all, her dead father didn’t teach her anything about rapping; he’s dead. But when Bri’s Aunt Pooh finally gets her in the Ring for her first rap battle, she finds herself facing off against Milez, the son of her father’s former manager, Supreme, with whom he had a falling out before his death. Bri wants to rap on her own terms, but the neighbourhood, and the world, have their own preconceived ideas about who she is, and she will have to face up to family history in order to fulfill her dream.

On the Come Up is Angie Thomas’s sophomore novel, following The Hate U Give, which has become a perennial presence on the YA bestseller list. Originally scheduled for publication in June 2018, On the Come Up was pushed back and released on February 5, 2019. In the meantime, Thomas was caught up in the whirlwind of having her debut novel adapted for the big screen. However, the wait was well worth it, as Thomas has delivered a solid follow-on that is set in the same world, and even the same neighbourhood, as The Hate U Give, but with a distinct protagonist and narrative voice.

One the Come Up takes place in the aftermath of the riots occasioned by Khalil’s murder in The Hate U Give. Bri is from the same neighbourhood, though she is bussed out to a magnet school for the arts in a middle-class neighbourhood. She and her other black and brown classmates are often targeted by the school’s security guards, a situation they have become less tolerant of as the protests resulting from Khalil’s death raise their social awareness and cause them to consider taking action. Bri lights a spark when she writes a song about a violent encounter with the guards, and how she is perceived by the world for being a black girl.

As in The Hate U Give, On the Come Up highlights a complex family dynamic that strengthens the surrounding story. Bri’s mother is a recovering addict studying to be a social worker. Her older brother Trey has finished his degree, and wants to go to grad school, but he is working in a local pizza shop to help his mom make ends meet, and get Bri through school. With an entrepreneurial spirit, Bri decides to sell candy out of her bag at school, a situation which leads to a rumour that she is a drug dealer, like her Aunt Pooh, a member of the Garden Disciples gang. Although Bri has always wanted to rap, her urgency is heightened by the knowledge that if she could just make it in the music industry, her mother wouldn’t have to choose between keeping the lights on and putting food in the fridge. She also has to struggle with her relationship with Pooh her aunt, and Pooh the drug dealer, a woman who is her number one supporter when she is around, but who disappears for days on end when “business” arises. And when Pooh disappears, Supreme comes knocking.

On the Come Up is largely told in prose, but contains a number of Bri’s raps and rhymes, including the full song that catapults her to infamy when the public chooses to take her verses and interpret them in the worst way possible. However, she rhymes almost instinctively, turning her daily experiences into little bits of verse that she jots down in her notebook for later use. Thomas strikes a nice balance between the two, and shows off her solid grasp of both in the process. The result is an immersive story that will drag you head first back into Starr and Bri’s world, even though their paths never cross.