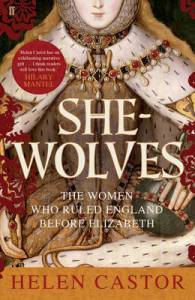 “Amid the chaos and confusion, one thing alone was certain: for the first time, a woman would sit upon the throne of England.”

When King Edward VI died in July 1553, the Tudor line of succession was in a peculiar position. Henry VIII had left behind one son—now dead—and two supposedly illegitimate daughters from earlier marriages. Henry VIII also had two sisters, Mary and Margaret, whose living descendants were all daughters. Thus, all the potential claimants to the throne were women, and while the identity of the next occupant of the English throne was by no means certain, the fact that England would have its first reigning Queen seemed indisputable. In order to contextualize the succession crises that followed Edward VI’s death, historian Helen Castor examines four precedents for female power in England, from the Empress Matilda in the 12th century, to Margaret of Anjou in the 15th.

Of the four women Castor profiles in She-Wolves, only one was an English-born princess who aimed to rule the country in her own right. She was also the earliest. When her father Henry I died without any living legitimate sons in 1135, his daughter Matilda, widow of the Holy Roman Emperor, was named as his heir and sought to claim his throne, but was usurped by her cousin, Stephen, who moved decisively to claim the crown. With her illegitimate half-brother at the head of her armies, Matilda fought for her rights, but the fact the she was unable to lead troops herself is one of the many factors Castor cites in her inability to gain a decisive advantage. The result was a civil war that tore the country apart for a generation, and ended only with a compromise; Matilda would never rule in her own right, but her son, Henry II would be Stephen’s heir. It would be another four hundred years before the country was faced with the prospect of being ruled by a woman outright.

The remaining three women were not English by birth, but French-born princesses and duchesses who married into the English royal family, the first being Matilda’s daughter-in-law, Eleanor, Duchess of Aquitaine. Here were three more typical examples of the means by which women could expect to wield power, in the names of their husbands and sons. From crusades to foreign wars to mental incapacity and long minorities, there were a variety of extenuating circumstances in which English Queens Consort or Queen Mothers might temporarily take hold of the reins of power. But as Castor’s account makes clear, the prospect of being reigned by a woman rarely sat easily, or lasted long, save in the hands of the cleverest politicians. Isabella of France would seize power from her inept husband, Edward II, in the name of their young son, only to succumb to the same excesses that had made her husband so deeply unpopular, and live to see that power seized back by the teenage son for whom she claimed to rule.

Castor acknowledges the difficulties inherent in writing about these four women particularly that, despite being Queens, the records of their lives are shockingly spotty. In many places, it is necessary to infer what their actions or motives might have been based on the surrounding context of documented English politics and history of the period. Castor relies on contemporary chroniclers, but duly notes their sympathies and prejudices, mindful of the fact that their accounts are often coloured by their own loyalties and preferences. In many places there are long gaps, such as the fifteen year period when Eleanor of Aquitaine was kept under house arrest after leading her sons into rebellion against their father. If it is not quite possible to know the personalities of these women, however, their strengths and weaknesses as politicians at least come into focus.

Overall, She-Wolves stands out due to the unique structure Castor employs, in which she opens with Edward VI’s death, turns back the clock to profile the four Queens, and then returns to the Tudor succession crisis to view it in light of what we have learned. The result is a unique take on a period of history that is already well-covered. Fans of the Tudors should note that while they frame this story, they are not the primary focus, and that the bulk of the text is dedicated to the women who preceded them.

How to Be a Tudor by Ruth Goodman

Wars of the Roses by Dan Jones

Faith and Treason by Antonia Fraser

One thought on “She-Wolves”