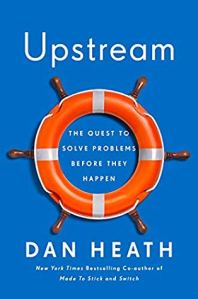 “So often in life, we get stuck in a cycle of response. We put out fires. We deal with emergencies. We handle one problem after another, but we never get around to fixing the systems that caused the problems.”

An ounce of prevention is worth a pound of cure, but in the day-to-day busyness of life, it can be easy to overlook systemic problems, focusing instead on quick fixes and immediate solutions. With our natural human bias towards reaction and visible results, it requires deliberation to step away from the urgent and immediate, and turn our attention towards long-term interventions that may not pay dividends for months or perhaps years, even in cases where the rewards are exponential. Often these deeper problems are invisible, but even when they are known, they may be ignored or deferred when no one wants to take responsibility for solving them. In Upstream, Dan Heath examines the reasons why preventative thinking is so difficult, how we can do it better, and the invisible pitfalls that plague such efforts, using examples from business, education, and healthcare to illustrate the broad nature of his point.

I appreciated that a lot of this book was not just about the benefits of upstream thinking, but also focused on why it is difficult, and anticipating the ways that it can go wrong. Heath, who teaches social entrepreneurship at Duke University, provides examples of times that upstream thinking succeeded, such as improving the graduation rate in Chicago Public Schools, but also points to dismal failures, such as the abuses of CompStat policing software to artificially lower crime rates. Heath also acknowledged the complex and interconnected nature of the problems upstream thinking might be applied to, and spends time delving into unexpected consequences of well-intentioned interventions. This is far from being a simplistic paean to the benefits of thinking ahead.

Data is the key to upstream interventions, as measurement is essential to evaluating long-term efforts. But even there Heath points to the pitfalls, and the ways in which metrics can be poorly chosen or gamed. If quantity and quality are not tracked in tandem, one will usually pay the price for the other. One such example is Expedia, which for a long time was only measuring how quickly their call centers resolved customer issues, without pausing to consider why there were so many calls in the first place. Heath also cites the egregious example of police officers failing to record reported crimes, or downgrading a rape to “theft of services” because the victim was a sex worker, in order to keep the crime rate artificially low.

Heath tells the same story two different ways to show how even perceived strengths of human behaviour can have negative consequences for upstream thinking. Our pride in being creative, persistent, and resourceful can trap us inside a system that never learns from its mistakes. By overvaluing adaptability in the moment, we abdicate the responsibility for spotting repeated problems, and fixing them before they happen again. But this requires systems thinking, and for someone to take ownership of the problem even if it might not seem to properly belong to them. This can be especially difficult in cases where the group that has the power or ability to fix the problem is not the same as the group that will directly benefit from fixing it. Through these carefully parsed nuances, Heath makes it clear why upstream interventions are anything but easy.

It was very interesting to be reading this book during the COVID-19 outbreak, as a lot of the examples Heath uses come from the realm of public health, which is ripe for preventative care initiatives. Here Heath discusses problem blindness, or the idea that “negative outcomes are natural or inevitable.” Early discourse around COVID-19 dismissed the outbreak as “just the flu” and many people expressed fatalism about the possibility of becoming infected, with little regard for the collective consequences. Many of the interventions we are currently being asked to participate in, from hand washing to social distancing, are aimed not at treating currently infected people, but at the much more abstract idea of preventing the cases that will otherwise be diagnosed ten to fourteen days from now. If these cases do not materialize, then that is “the world avoided” by the intervention. COVID-19 is practically a case study in the difficulties of upstream thinking; if we succeed in slowing the spread, flattening the curve, and preventing the health care system from being overwhelmed, then we will have seemed to have cried wolf. Meanwhile, the economic harms are immediate, and evident, but are being attributed to COVID-19 hysteria, rather than seen as evidence of problems and weaknesses in the systems of our daily lives. It is easier to blame social distancing for economic hardship than it is to look upstream to wealth disparity, a weak social safety net, insufficient unemployment benefits, deficient sick leave policies, and so many more social issues that go well beyond one pandemic. In short, this was an extremely timely read, but the concepts found here apply to much more than our current situation.

One thought on “Upstream”