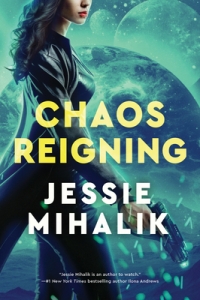 “I dared to dream of more.”

With all her siblings out fighting or spying in the war between House von Hasenburg and House Rockhurst, youngest sister Catarina is stuck at home on Earth, serving as a political surrogate for her conniving parents. Protected and beloved by her older siblings, Cat longs to make a more substantial contribution, but her carefully constructed public mask as a vapid socialite means that all she can really do for House von Hasenburg is marry someone who will back them in the war. But then an invitation from House James to a particularly exclusive party offers Cat the chance to find out if House James was responsible for her brother Ferdinand’s kidnapping. But her older sister Bianca is on to her maneuvering, and she insists on sending two mercenaries, Aoife and Alex, to guard Cat’s back. Only, in order to get Alex into the heart of House James, Cat will have to pretend he is her date, not her body guard.

Like Bianca in Aurora Blazing, Cat has a secret, only in addition to being afraid of being used by their ruthless father, she owes her life to illegal genetic modifications that would make her very existence criminal under Royal Consortium law. Despite the efforts of her older siblings to protect her, Cat has had to become a ruthless dissembler, using social power as a pointed weapon. But the events of Chaos Reigning call for Cat to tear down her carefully crafted public façade, and reveal the intelligence and competence she has been hiding. No doubt the really interesting part of her story comes later, when she has irrevocably revealed the truth, and has to carve a new path forward alongside her ambitious best friend, Ying Yamado.

As a love interest, Alex is more in the tradition of Aurora Blazing’s Ian than Polaris Rising’s Marcus. In fact his main weakness might be that he isn’t sufficiently distinguished, and the fact that he and Cat are keeping secrets from one another means that we don’t really get to know him better. The reader actually knows more about him from his side role in Aurora Blazing than Cat does, and that is still precious little to go on in terms of character development. His main appeal is that he is handsome, and that he will back Cat’s manoeuvres even when they are dangerous. Luckily, I’m a bit of a sucker for a fake dating trope, so I put aside my skepticism and went along for the ride, which was slower burn on the romance, and rollicking in the adventure department.

Consortium Rebellion is a trilogy, making this the final installment in the series. Honestly, it seems like it could go for another book, in order to resolve the Syndicate plotline, not to mention the final fate of the faster than light technology that started the war to begin with. I know I would definitely read a team up novel where the von Hasenberg sisters take on the galaxy together! But it seems that instead Jessie Mihalik will return with a new series about intergalactic bounty hunters, due out in 2022.