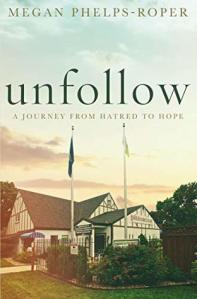 “Doubt was nothing more than epistemological humility: a deep and practical awareness that outside our sphere of knowledge there existed information and experiences that might show our position to be in error. Doubt causes us to hold a strong position a bit more loosely, such that an acknowledgement of ignorance or error doesn’t crush our sense of self or leave us totally unmoored if our position proves untenable. Certainty is the opposite: it hampers inquiry and hinders growth.”

Megan Phelps-Roper grew up in Kansas, a member of an extremist Christian church composed largely of her family members that would become infamous for their deliberately provocative public protests. Her grandfather was the fire and brimstone pastor, a man who underwent a shocking transition from civil rights advocate to publicly raging bigot after losing his bar license. Her mother, also an attorney, was the church’s chief organizer and spokesperson. As part of the family’s third generation, Phelps-Roper helped lead the church’s charge into the social media space, becoming a regular and outspoken presence on Twitter. But ultimately it was her online proselytizing that led her to ask questions about her faith that she had never allowed herself to consider before. Unfollow tracks the unexpected twists that would lead her to leaving the church in her late twenties, along with her younger sister Grace, and build a new life out in the secular world she had been taught to abhor.

Phelps-Roper was born and raised in the family church, and was only five years old when their “picketing ministry” began. As a result, she was expected to publicly represent the church’s doctrine from an extremely early age. In Unfollow, she has explained the church’s positions and ideas with such articulacy and immediacy that it was hard at times to believe that she didn’t actually hold to them anymore. The Bible verses from the King James Version still roll out effortlessly to underpin and elucidate each position. For most of the book, she uses the pronouns “we” and “our” to narrate events. It was only towards the end of the book that I began to feel her narrative identity separating from that of the church, but it still felt immediate and raw. I have to admit I would be curious to read another book ten years from now, and see what additional insights and perspectives more distance brings.

Unfollow also describes an internal power struggle within the church not unlike what has happened in other new churches when the founder transitions away from leadership. Phelps-Roper was her mother’s right hand, and her mother was the right hand of her own father, the head of the church. Her mother and grandfather are forceful personalities in the narrative; her own father is largely a narrative afterthought until the power shift begins, and as a male head of household he is made part of the new council of elders, albeit the least powerful one. The internal coup aimed at consolidating power to the older, married men, removing women from positions of authority, and increasing the subjection of wives and daughters within the church. To some extent, I think this gave Phelps-Roper a taste of what it was like not to be in a position of privilege within the highly controlling structure of the church, and opened the door to further doubts and questions about hypocrisy, theology, and finally the very divinity of the Bible itself.

Ultimately, the church’s media savvy and penchant for garnering public attention proved to be a double-edged sword. It exposed one of its spokespeople to the very sinners she was supposed to be repudiating. Instead of finding monsters, she found beautiful, messy, wonderful, empathetic people with a tremendous capacity for forgiveness and understanding. She met Jews whose familiarity with havruta made them uniquely suited to debating her, and gay people who knew what it meant to make a choice that would result in losing one’s family. Surprisingly, the tactics the church had traditionally used to garner attention proved counterproductive, “I could watch a Twitter conversation derail in real time whenever I included personally disparaging language,” Phelps-Roper admits, “The exchange would swiftly devolve from theological debate to a playground quarrel.” Slowly but surely, she began moving away from the church’s more radical positions and tactics.

I have some mixed feelings about reviewing this book, despite the fact that it was an emotionally raw and well-written account of Phelps-Roper’s exit from the church and her extended family. If this book made one thing clear to me, it is that the church she left behind thrives on our attention. Counter-protesters just make things exciting; opposition makes them feel validated; retaliation makes them feel righteous and oppressed. The church is engaged in a relationship of exchange with the media, which loves them for their shock value; they are screaming, singing, sign-waving click-bait, and as a result they are regularly able to make world-wide news despite consisting of only about eighty members. Ultimately I recommend this book on the grounds that it is truly insightful about the experience of being raised in such an environment, and the factors that can contribute to dismantling the resulting mindset, but I remain cautious about granting the church more attention than it deserves.

A Queer and Pleasant Danger by Kate Bornstein