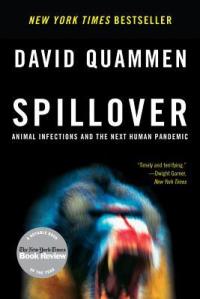 “Make no mistake, they are connected, these disease outbreaks coming one after another. And they are not simply happening to us: they represent the unintended results of things we are doing.”

I picked up this book because my last couple of pandemic reads had left me particularly curious about the phenomenon of zoonosis. Zoonoses are diseases that originate in animals, usually harboured by a reservoir—a species that chronically carries the bacteria or virus but is not sickened by it—and are transmissible to humans. When the right set of circumstances occur, when the fragile ecological balance of the world is disrupted in a new way, a pathogen can spill over from animals to humans. Sometimes, that spillover is a dead end; the circumstances are so unique that they may never occur again. Or the virus can be transmitted to humans, but not between people: game over. But the thing that keeps virologists up at night is the pathogen spillovers that are not only virulent—highly deadly to humans—but also highly transmissible between humans once the species boundary has been breached. With the possibility of the Next Big One always looming, David Quammen takes the reader through famous outbreaks of zoonotic illnesses, with sections on Hendra, Ebola, malaria, SARS, Lyme, Nipah and HIV.

David Quammen is a journalist with a long history of covering zoonosis, with the consequent experience in translating a highly technical subject for a lay audience. As detailed in the book, his field journalism has taken him on several expeditions with top scientists working to trace the origins of various zoonoses, from Africa to Asia, following bats, gorillas, and chimpanzees. He interviews people as world famous as Jane Goodall, and specialists who are only rockstars to those who pay close attention to the world of virology. Spillover was published in 2013, and presages not only the 2014 Ebola outbreak, but the current COVID-19 situation as well. That isn’t to say that Quammen or his experts explicitly predicted it; in fact, the final chapter of the book focuses on influenza in particular, and the possibility of avian influenza (H5N1) achieving human-to-human transmission. But COVID-19 is, like influenza, an RNA virus with all the rapid mutation that entails. The broad point is not predicting any specific spillover, which would be virtually impossible, but rather illuminating the circumstances that make these types of events all but inevitable.

One very interesting trend that emerges is bats, which have been implicated as the reservoir host for a variety of spillover viruses. Nipah and Hendra, for example, are confirmed to originate with bats. In his 2006 book China Syndrome, Karl Taro Greenfeld followed the trail of SARS to palm civets in southeastern China’s wild animal markets. But in Spillover, Quammen takes the reader through more recent evidence that palm civets were actually an amplifier or transitional host that enabled the virus to reach humans from bats. Although the reservoir for Ebola remains unconfirmed, virologists are looking at bats with great interest. Unfortunately, Quammen’s reporting reveals that the significance of bats in all this is still poorly understood. It could just be that there are so many bats; at 1116 species, they account for one quarter of all mammal varieties. The fact that they live in large roosts conducive to spreading the virus within their communities, combined with their mobility and range could also be significant. But until bat immunology is better understood, the answer to why so many spillover events seem to originate with bats cannot be more than speculative.

I also found the section on HIV/AIDS particularly interesting because most of the books I have read on the subject focus on the cultural history, specifically the impact on the gay community. None of those books have tended to look further back than the Canadian flight attendant who become known as Patient Zero in a study that focused on a North American outbreak cluster in the early 1980s. Quammen’s interest is more epidemiological, and the story of HIV is particularly fascinating because the science suggests that the spillover event took place much earlier than one might have expected—perhaps as early as 1908. However, this section does get a bit bogged down with a long, imaginative tangent where Quammen uses the little available evidence to extrapolate a narrative sequence about a hunter who ultimately brings HIV out of the forest. The true Patient Zero for HIV will never be known, and while Quammen’s imagining isn’t implausible based on the available evidence, it nevertheless feels out of place in this otherwise very factual book.

Spillover is on the long side—the print edition comes in at nearly 600 pages—and a bit technical at times, but if you’re only going to read one book about epidemics, this one combines multiple outbreaks into a single volume, highlights trends and commonalties, and provides a good basic understanding of  the relationship between virology, ecology, and epidemiology. The chapter on Lyme disease is particularly apt in its illustration of how important the ecosystem is to prevalence of a disease. If you’re not up for the full volume, Quammen has published Ebola and The Chimp and the River, both short extracts from this larger book focusing on Ebola and HIV respectively. If, like me, information is your coping mechanism of choice at the moment, you’ll emerge from Spillover with a much better contextual understanding of our current situation, armed with many of the essential concepts for understanding the virology and epidemiology underpinning the ongoing public health conversation that will be dominating our discourse for the foreseeable future.