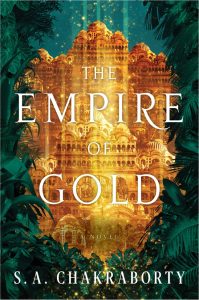 “I find that those who look on politics with contempt are usually the first to be dragged down by them.”

Daevabad has fallen to the machinations of Banu Manizheh, and her Afshin, Darayavahoush. Nahri and Ali have fled, leaving the city in the hands of a brutal conqueror who seems poised to be even crueler than the tyrant she overthrew. But Suleiman’s Seal was never meant to leave Daevabad, and the consequences reach across much of the magical world, stripping the daevas of their powers. Only Dara and Manizheh’s ifrit retain their magic, leaving the people of Daevabad helpless, though the Geziri and the shafit try to mount a resistance led by Zaynab al Qahtani. Even Ali’s mysterious marid powers seem to have been affected in strange ways, though perhaps this is because he now bears Suleiman’s Seal. Thrust unexpectedly into the human world, Ali and Nahri must decide whether to return to Daevabad and fight for the throne to which each of them might stake a claim.

While five years passed between The City of Brass and The Kingdom of Copper, Empire of Gold picks up in the immediate aftermath of the fall of Daevabad. After five years as a prisoner of the al Qahtanis, trapped in a political marriage to Ali’s brother Muntadhir, Nahri is finally free, and unexpectedly finds herself back in Cairo. Returned to her human home, and stripped of her Nahid powers, Nahri seriously considers letting Daevabad fade into memory, and apprenticing herself to her old apothecary friend Yaqub. Meanwhile, Ali’s thoughts turn to Ta Ntry, and the possibility of reuniting with his exiled mother, Queen Hatset. He has questions about his marid magic, and suspects that the answer lies in his Ayaanle heritage, which he has long been subsuming in favour of his father’s Geziri bloodline. But with Ghassan dead, and his djinn magic snuffed out, the water is calling to Ali in new ways. Neither Nahri nor Ali ever expected to be called to rule, but now the question of that potential responsibility weighs heavily on them as they look to an uncertain future.

One of the stand out features of this series has always been the complex dynamic S.A. Chakraborty created between the different magical beings of the world, and even within the ranks and classes of the djinn themselves. Those rivalries come to a head here, as Manizheh takes revenge for the deposed Nahids, having conquered Daevabad by unleashing a genocidal magic against the Geziri in The Kingdom of Copper. Though she has reclaimed the palace of her ancestors, and nominally rules the city, the various quarters remained locked tight against her, with the daevas fearing to trust such a brutal takeover, even by one of their own. Once, Manizheh was Ghassan’s prisoner, bent to his purposes, and fighting desperately to prevent the union she knew he desired. But while her past is tragic, she now she seems determined to visit that abuse upon others, willing to pay any price for power.

In the midst of all this, Dara takes center stage. As Manizheh’s long-trusted servant, and one of the only magical beings left in Daevabad, it is up to him to control the city his mistress has conquered. If he refuses, control falls to the conniving ifrit Aeshma, whose influence with Manizheh Dara already deeply mistrusts. Chakraborty delves deeper into Dara’s backstory, revealing the scene in which as a young Afshin, the Nahid council called him to Qui-zi, the massacre that would earn him the moniker Scourge. Dara may be even more hated in Daevabad than Manizheh herself, and it seems impossible for one person to hold the city against the inevitable uprising forever. Worse, Dara is tortured by the question of whether he made the wrong choice when he remained loyal to Manizheh rather than following Nahri. Manizheh seems to be turning ever further towards darkness as she seeks to replace the power she lost when Suleiman’s Seal slipped through her fingers. And Dara must face the question of what further horrors he is willing to perform in the name of the loyalty he swore to the Nahids long ago. Although a sympathetic character, Empire of Gold calls Dara to account for the orders he has willingly obeyed.

In the final volume of the Daevabad trilogy, S.A. Chakraborty delivers a whopping 784 page series ender that upends the established politics of Daevabad by delving into questions of family legacy, intergenerational trauma, monarchy, governance, genocide, authoritarianism and the distribution of power. Dara, Nahri, and Ali share narration through rotating perspectives with escalating cliffhangers, though many of Chakraborty’s other conniving, memorable characters appear as well as she brings this sprawling Islamic fantasy to its epic conclusion.

2 thoughts on “The Empire of Gold (The Daevabad Trilogy #3)”