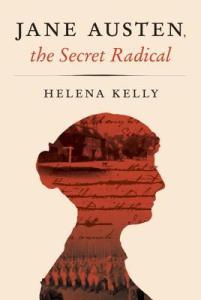 “Jane’s novels, in truth, are as revolutionary as anything thing that Wollstonecraft or Tom Paine wrote. By and large, they’re so cleverly crafted that unless readers are looking in the right places—reading them in the right way—they simply won’t understand.”

When Jane Austen died in July 1817, she had lived only forty-one years, a quiet life amongst her family and friends that does not make for a remarkable biography. She was unmarried, and lived with her widowed mother and spinster sister, in a cottage on the grounds of the estate of one of her many brothers. Between the American Revolution and the Napoleonic Wars, England had been at war for most of her life, and she never had the chance to travel outside the country. In accordance with decorum, she did not publish under her own name during her lifetime. With such a scanty biography, and a family that was heavily invested in controlling her image after her death, Oxford professor Helena Kelly argues that to truly understand Austen’s life, we must look to her published works, because “it is impossible for anyone to write thousands upon thousands of words and reveal nothing of how she thinks or what she believes.” It is to Austen’s six novels that Kelly turns to understand the author’s true thoughts and opinions, bolstered by her letters and Kelly’s knowledge of English history. But while many people find Austen’s novels to be light romances, Kelly argues that we must read more deeply to unearth the true thoughts and less orthodox opinions of a woman who mocked the monarchy, criticized the clergy, and thumbed her nose at the titled aristocracy.

Kelly begins with Northanger Abbey, likely the first of Austen’s novels to be sold, and the last to be published, for the publisher that initially bought the rights never actually printed it. She later reacquired the rights, but it was not published until her after death, leaving open the question of whether she wanted this youthful manuscript to be read. Each chapter begins with a biographical sketch from the life of Jane Austen, showing where she was and what was happening in her life at the time she was working on each of her books, though this is an inexact business, as her early books in particular were likely worked on over many years. But the main part of each chapter is given over to close reading of Austen’s work, looking for evidence of her engagement with the radical ideology of the time in which she lived. Interestingly, Kelly never applies the word “radical” to Austen directly; she reserves this for political thinkers such as Thomas Paine, Edmund Burke, William Godwin, and Mary Wollestonecraft, and once applies it to Austen’s most famous heroine, Elizabeth Bennett.

When the characters from all of Austen’s books are taken together, as Kelly does here, it is clear that Austen did not think much of the nobility or clergy. Most of Austen’s characters are untitled gentry, but characters such as Sir William Lucas and Lady Catherine de Burgh are figures of fun, and the Reverend Mr. Collins still more so. The Reverend Mr. Elton of Emma is hardly better in his pretensions and flirtations, and Edmund Bertram, the hero of Mansfield Park, openly admits the he is going into the Church out of convenience rather than any sense of vocation; he knows that nepotism will provide him with a living. Altogether, Kelly makes a strong case that for the daughter of a clergyman, Austen did not have a great deal of respect for England’s traditional institutions and authorities.

It is also clear that Kelly’s view of Austen’s novels is not particularly romantic. In her reading of Sense and Sensibility, Kelly suggests that the math does not add up in the story Colonel Brandon tells Elinor about whether he is the father of his ward. He never outright denies the relationship, but seems to disavow it through his timeline. Kelly points out that the fortune that saved the estate Colonel Brandon inherited from his brother rightly belongs to his ward, since it was essentially stolen from her mother when Brandon’s father abused his guardianship and forced her to marry his older brother. In her close reading of Emma, she makes the case that Mr. Knightley is engaged in an enclosure of the commons, something that was happening at an extremely rapid pace during Austen’s lifetime, with serious consequences for the poor who relied on those resources. Kelly further suggests that by marrying Emma and Isabella, the Knightley brothers will eventually be able to complete an enclosure plan for Highbury and Donwell that the conservative and change-averse Mr. Woodhouse would be unlikely to agree to. Once married, their property belongs to their husbands when they eventually inherit Hartfield. Austen’s other heroes do not fare much better under Kelly’s scrutiny.

Helena Kelly knows her English history, and uses it to illuminate the context of Austen’s novels beyond the drawing rooms in which they take place. If her theories are sometimes far-fetched, they are always thought-provoking, and are looking to tie back to that history. “Read Jane’s novels,” Kelly implores, “they’re there to speak for her: love stories, yes, though not always happy ones, but also the productions of an extraordinary mind, in an extraordinary age. Read them again.” No doubt I will be thinking of her ideas the next time I revisit the texts, even as I doubt I will be taking some of her theories to heart.