Today I’ve got mini-reviews four books by and about nonbinary and genderqueer people, including two young adult novels, and two memoirs, including one graphic memoir. I’m part of a monthly bring your own book club with other library workers, and this month’s theme was “read a book by an author whose gender is different than yours.” Having read a lot of books by men already in my life, I decided to focus on books by nonbinary people instead!

I Wish You All the Best by Mason Deaver (they/them)

This YA novel is a classic coming out narrative, but for gender rather than sexuality. Ben is thrown out by their parents after coming out as nonbinary, and is taken in by their estranged older sister, Hannah. Ben starts the last semester of senior year at a new school, where they decide not to come out as nonbinary because of the fallout from the fight with their parents. At the new school, Ben falls for their first new friend, the handsome and ebullient Nathan Allan. This quiet contemporary focuses on relationships and acceptance, including Ben’s growing feelings for Nathan, reconnecting with their sister, and their decision about whether or not to forgive their parents. One thing that I Wish You All the Best does really well is highlight just how unnecessarily gendered language can be in small, quotidian ways that creep into everything. From binary checkboxes on forms, to endearments like “little bro” or “dude” and “my prince,” gendered language is a minefield that is slowly killing Ben with a thousand thoughtless cuts.

Felix Ever After by Kacen Callender (he/they)

Whereas I Wish You All the Best is a coming out story, Felix Ever After follows the story of Felix Love, who has already transitioned to male, but is still exploring their gender identity and coming to terms with some of the nonbinary options. Felix has never been in love, but has a deep romantic streak, and this novel sees him caught between an enemies-to-lovers epistolary romance via Instagram messages, and the possibility that one of his oldest friendships is actually romantic. Next to the romances, my favourite element of this book was the way it explored the complicated forms of homophobia and transphobia that can exist within the queer community where Felix is supposed to feel safe, such as his ex-girlfriend Marisol, and the anonymous bullies causing trouble at school and online. Felix’s best friend Ezra is the light of this book, and he reminded me a great deal of Nathan from I Wish You All the Best. 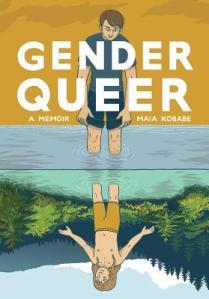 This graphic memoir follows Maia Kobabe on eir exploration of gender, and how e came to understand that e was nonbinary, with colours by eir sister, Phoebe Kobabe. The book recounts eir confusion about increasingly gendered expectations in childhood, such as differences in acceptable swimwear for young boys and girls. As e gets older, there is an increasing focus on body dysmorphia, particularly body horror related to menstruation and gynecological exams. E confesses to secretly harbouring a guilty wish for breast cancer as an excuse for a mastectomy. Unaware of the nonbinary option, as a teen Kobabe wished for the ability to switch between genders at will, like in the cartoon Ranma ½. The memoir comes to an open ending, as Kobabe has realized eir nonbinary identity, but is still struggling with being open about it in various settings, such as the art class e teaches. The book concludes: “A note to my parents: Though I have struggled with being your daughter, I am so, so glad I am your child.” 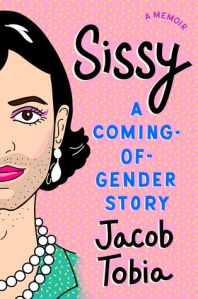 Jacob Tobia is a gender nonconforming writer, producer, and performer based in Los Angeles. Sissy is their memoir about growing up in North Carolina, and their years coming into their gender identity and expression as a scholarship student at Duke University. Tobia is perhaps best known for their 2012 run in five inch high heels across the Brooklyn Bridge to raise money for the Ali Forney Center after it was flooded by Hurricane Sandy. Tobia has a loud love-me-or-leave-me style that you will either jive with, or not; in their conclusion they write “to this day, your divine conviction in your own self-love makes you kinda arrogant and a little bit of an asshole,” apparently aware of the inevitable dichotomy. Tobia likes humour and extended metaphors; for example, they propose that instead of the closet, the metaphor for coming out should be a snail coming out of its shell. Their tone is a whiplash combination of earnestness and irreverence, mixing insights about gender and socialization with jokes, dropping insights about toxic masculinity in the same breath as a dick joke. Tobia loudly pushes for more trans stories that go beyond the traditional gender binary, using their own struggles with their parents, their church, and their university to pave the way.

3 thoughts on “Nonbinary and Genderqueer Reads”