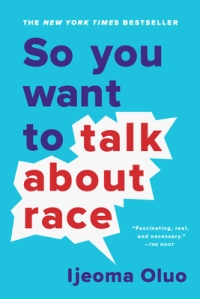 With grace, patience, and occasional humour, Seattle writer and activist Ijeoma Oluo tackles many of the questions you might be too embarrassed to ask about race, for fear of putting your foot in your mouth. Oluo covers such fundamentals as “What is racism?” and “What is intersectionality and why do I need it?” to get readers on the same page, working from the same definitions, before tackling more specific queries, such as “What is the school-to-prison pipeline?” and “Is police brutality really about race?” The chapters do not need to be read strictly in order, but it is helpful to begin with the first five, which are about concepts and definitions, before digging into the twelve chapters that address specific issues.

I first read this book back in March 2018, shortly after it was published. I ended up naming it one of my top non-fiction reads of 2018. At that time, I listened to the audiobook, narrated by the excellent Bahni Turpin. However, I don’t usually write reviews of audiobooks, since I’m not making the kind of notes that I usually take when reading a print book, which form the basis for my reviews. Last fall, I picked up a copy of the new paperback edition, but didn’t actually dig into at that time.  Recently however, I’ve been talking to folks about this book a lot, and been wishing I had written a more substantial review, so the time seemed ripe for a reread.

So You Want to Talk About Race is a stunning work of emotional labour that takes the time to work privileged readers through hard subjects in a way that may actually have a chance of getting those readers to see it as a question of systemic injustice rather than as a matter of individual failing about which they need to be defensive or angry. This is the fundamental grounding in understanding systemic racism that our education systems currently fail to provide anywhere but the college level, and often not even there. I never took an Indigenous Studies or Women’s Studies class during my post-secondary education, and I’m not even sure my university offered a critical race theory course. This essential knowledge is treated like an optional elective.

In the first chapter, Oluo writes that “these are very scary times for a lot of people who are just now realizing that America is not, and has never been, the melting-pot utopia their parents and teachers told them it was.” And while that was undoubtedly true when she wrote it, it strikes the same note with a deeper resonance in 2020, when many people are opening themselves up to talking and thinking about ideas they might never have entertained before. While this book has a chapter on police brutality, for example, it doesn’t have one about abolishing the police. Even just two years ago, that wasn’t a topic that fit into a 101 conversation about race and racism, but now entire cities are having it about the future of their police departments.

Oluo weaves in personal stories, often at the beginning of the chapter as an illustration of the concept she is about to unpack. Sometimes, such as the chapter on police brutality, it is an example of oppression from her own life as a self-identified fat, queer black woman. But other times, she uses her privilege as an illustration as well, such as the story of the picnic on Capitol Hill, or her college education, which qualified her for jobs that had nothing to do with her political science degree, and earned her higher pay in those jobs, while Black and Latinx colleagues with more experience but no degree were ineligible for promotion. By openly exploring and acknowledging her own privileges without defensiveness, she invites readers to do the same.

This is a book that is less for your unabashedly racist uncle, and more a book for talking with the aunt, cousin, or friend who thinks that they aren’t racist. What Oluo unpacks over the course of seventeen chapters is that racism is less about the beliefs of individual racists, and more about the systems of power that undergird and reinforce those beliefs, causing them to persist generation to generation even as explicit adherence to concepts like eugenics or Manifest Destiny fades. We are racist not because we as individuals are bad people, but because we operate in a system that is larger than any one individual’s beliefs or actions. Individualism blinds us to the larger patterns playing out in society. Again and again, I found myself writing the words “intent vs. harm” into the margins of this book. We desperately want to believe that we cannot be racist if we do not intend to be, but intent does not mitigate harm. If we fear being called racist more than we fear our unexamined racism, the conversation can never progress. If we are too afraid to speak, how will we ever take action?

The paperback edition includes a new preface by the author, as well as a discussion guide. In the preface, the author takes responsibility for some of the short-comings of the first edition, such as the inconsistent terminology she used around Indigenous people. She also moves to more explicitly acknowledge the work of Kimberlé Crenshaw, the scholar who coined the term intersectionality to highlight the need for feminism to explicitly consider the experiences of women of colour. Notably, the discussion guide includes not just discussion questions, but also principles for having a safe and productive discussion, such as “do not allow white group members to treat their discomfort as harm done to them,” and “don’t allow people of color to be turned into priests, therapists, or dictionaries for white group members.” These are valuable additions to the book, and I would recommend the newer edition if you’re planning to pick this one up.

2 thoughts on “So You Want to Talk About Race”