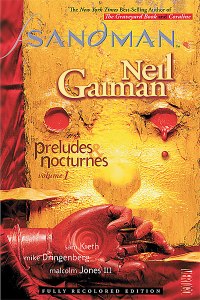 “I find myself wondering about humanity. Their attitude to my sister’s gift is so strange. Why do they fear the sunless lands? It is as natural to die as it is to be born. But they fear her. Dread her. Feebly they attempt to placate her. They do not love her.”

Preludes and Nocturnes is volume one of ten in the Sandman tradepaper slipcase set released by Vertigo in November 2012.  It contains the first eight issues of the Sandman comics, which were originally published between 1988 and 1989. The edition has been recoloured, and includes the original issue covers by Dave McKean. The first seven issues tell the story of Dream (also known as Morpheus), a member of the Endless who is captured by a magician and held prisoner for over seventy years. The artefacts that give him power over sleepers and the Dreamtime are stolen and lost. When he finally escapes from his captors, he must track down his lost artefacts and reclaim control of the Dreamtime. To do so he must travel through the earthly realms and to the gates of Hell itself. The eighth issue is the odd story out in this volume, as it introduces Dream’s sister, Death, the intended victim of the magician’s spell in issue one.

The series gets off to a slow start, as Gaiman explores the implications of imprisoning Dream, which manifests as a strange sleeping sickness. The action begins when Dream’s patience pays off and he is able to escape and begin his quest to find his lost objects of power. He meets a number of DC Universe characters, including John Constantine, The Scarecrow, and members of the Justice League. Overall, these comic book heroes and villains feel out of place in Gaiman’s darker, more mythology based world. The highlight of this initial sequence is issue four, A Hope in Hell, in which Dream must travel to Hell to try and find the demon that now possesses his helm. Here we are first introduced to Lucifer Morningstar, who co-rules Hell with Azazel and Beelzebub. Sam Keith’s dark, oozing Hell has a sickening aspect, but it is also perhaps the only section of the book which is not greatly improved by the recolouring work done for this edition.

The eighth issue, The Sound of Her Wings marks a turning point in both the art and the tone of the story. Mike Dringenberg, the inker for issues 1-5, became the penciller beginning with issue 6. His version of Dream is more solid and present, whereas Sam Keith’s Morpheus always seemed to be on the verge of melting off the page. Gaiman also hits his stride, blending the dark ruminations on mortality with light references to Mary Poppins in his strangely happy-go-lucky version of Death. For new readers, this story is an awkward place to end a volume, as it doesn’t fit with the previous issues, and offers little idea of how the story will proceed. However, for fans of the series, it is the story in which Sandman begins to stand apart from the DC Universe, for the better.

These are my favourite fiction titles read (not necessarily published) in 2012. Click the title for links to full reviews, where applicable. My top 5 non-fiction titles for the year will go up Thursday.

In 1984, personal trainer Aomame disembarks from a taxi in the middle of a Tokyo Expressway and climbs down an emergency exit in order to make an important appointment. But the world at the bottom of the emergency exit is subtly different from the world she left behind. Also in Tokyo, author Tengo is approached by a publishing contact with an offer to ghostwrite a beautiful and unusual fantasy novel written by a peculiar seventeen year old girl with a troubled past. Haruki Murakami weaves elements of mystery, fantasy and dystopia together brilliantly to reveal the connection between Aomame and Tengo and their seemingly disparate stories.

With his signature wit and humour, Christopher Moore brings a bright new perspective to the life of Christ and the many myths surrounding it by retelling it from the point of view of his dedicated and clumsy childhood pal, Biff. Biff has been reincarnated to tell the tale of the missing years of Christ’s life, between his childhood and his ministry. Their travels through Asia might more aptly be styled misadventures, but they all lead back to the fate that waits for “Joshua” on Calvary. Moore’s Gospel according to Biff is irreverent and hilarious.

Two great magicians with a long-standing rivalry pit their apprentices against one another in a battle of skill and wits with an unusual setting: a magical black and white circus which operates only at night. Celia and Marco are bound to the struggle but their growing feelings for one another and frustration with their mentors cause them to rebel against their fate. And the luminous circus setting in which they face off has serious consequences for the other denizens of the circus as the competition stretches on. Erin Morgenstern brings the circus to life in the mind’s eye in stunning detail.

Returning to the world of supernatural fiction, Anne Rice puts her own spin on the legend of the werewolf. Reuben Golding is a young reporter from a wealthy San Francisco family. He has a budding career and beautiful girlfriend, but his life is turned on its head when he is invited to Nideck Point, a majestic and isolated manor on the Mendocino coast. His hostess is murdered, and he is ravaged by a werewolf. When he transforms himself, he is compelled to answer the cries of suffering innocents, and is left to struggle with the moral implications of the violence he inflicts on their tormentors. Anne Rice blends philosophic introspection and supernatural mystery along with her unusual talent for describing houses and landscapes. The sequel, The Wolves of Midwinter, has been announced for October 2013.

The legend of Achilles and his role in the fall of Troy are exquisitely reimagined by Madeleine Miller, told from the perspective of his dedicated companion, Patroclus. Former prince Patroclus is an unwanted exile in the court of King Peleus. Despite his dark past, Patroclus is gentle and disinclined towards the martial arts he is expected to master. Achilles is a natural warrior, destined for great conquests by the ambition of his goddess mother, Thetis. Their opposing natures bind them together into a steadfast friendship that grows into a romance that will see Patroclus follow Achilles to the walls of Troy, despite Thetis’s determined efforts to drive them apart. Miller delivers a moving tale of friendship and romance doomed by its setting on the stage of history.

“Science has its own magic—the magic of reality.”

In The Magic of Reality, biologist Richard Dawkins addresses the science behind occurrences commonly given magical explanations in mythology and folklore. Dawkins contends that the world is poetically magical without needing to be supernatural, and he sets out to make us think differently about how amazing our current scientific knowledge really is. Even more refreshing, he freely admits when there is something that science does not yet fully understand. In twelve chapters, Dawkins introduces a natural phenomenon, such as the rainbow or earthquakes, describes some of the myths used to explain these occurrences in various cultures, and then explains what we really know about why these things happen.

The book is written at a level suitable for older children (iTunes recommends ages 9+), but even the adult reader may find a new perspective in these pages. Dawkins uses scientific thought experiments to get the reader to think differently about commonly known facts. For example, Dawkins asks the reader to stop for a moment and try to image what your 185 million-greats-grandfather looked like. If you imaged anything other than a fish, you might benefit from reading this book. (I imagined an ape, which is far too few greats.) However, some of these thought experiments are difficult to describe or visualize, such as when Dawkins tries to use pins and string to explain why a circle is a special case of an ellipse.

In the paperback edition of this book, to say that it is illustrated by Dave McKean is a bit of an overstatement. The only illustrations are the black and white pictures at the head of each chapter. In fact, most of McKean’s work on this book is only available in the hardcover and iPad editions of the book. The iPad app version of the book is colourfully illustrated and even animated by McKean. The illustrations, animations and in-book games are extremely useful because they concretize some of the thought experiments and concepts that are difficult to explain in words alone. For example, instead of trying to visualize Newton’s famous multi-prism experiment, one of the games gives you the opportunity to recreate it. And instead of trying to describe how the sound of English language has evolved in the last 500 years, the app includes an audio file of a reading from a portion of The Canterbury Tales. If you have an iPad, the app, which is $2 more than the iBook, blows the paperback edition of the book out of the water. The illustrations, animations, games and audio enhancements take the book from merely good to outstanding. But whatever edition you decide to buy, look carefully; there is a great deal of variability with this title.