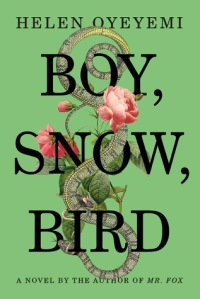 “Mirrors see so much. They could help us if they wanted to. In those days I spoke to every mirror in the apartment. I questioned them, told them what to do, but none of them answered me.”

In 1953, twenty-year-old Boy Novak flees her abusive father in New York, landing in the small town of Flax Hill, Massachusetts. Everyone in Flax Hill is an artisan, whereas Boy has no special skills to speak of. She drifts from job to job, and man to man, but keeps coming back to Arturo Whitman, a jewellery maker with a young daughter called Snow. More in love with the idea of being Snow’s mother than with Arturo himself, Boy nevertheless agrees to marry him, becoming the stepmother of a beautiful and sweet-natured girl who is adored by her entire extended family. But when Boy gives birth to her own daughter by Arturo, baby Bird cannot live up to the Whitman’s exacting standards. Suddenly Boy no longer has it in her to love Snow, who she now sees is beloved by her grandparents largely for her particular brand of beauty. Driven apart by this family rift, Boy, her daughter, and her stepdaughter must all face the terrible power of appearances.

Slow-paced but captivating, the first part of Helen Oyeyemi’s Boy, Snow, Bird is narrated by Boy herself, as she recounts the escape from her abusive father, and settling into her new life in Flax Hill. Events are largely quotidian, but there are occasional strange happenings, particularly when mirrors are involved. This magical element is largely symbolic rather than significant to the development of the plot; the obsession with surface appearances turns out to be a deep one in the Whitman family that Boy marries into. Magical events are never so concrete as to be provable, but they pervade the story nonetheless.

The second section of the story is recounted by thirteen-year-old Bird, who has been raised separately from her half-sister Snow, but retains a powerful curiosity about her. After discovering a letter addressed to her from Snow hidden in her mother’s jewellery box, Bird and Snow begin a covert correspondence eventually culminating in their first meeting since childhood. This section is shifting and slippery, as Bird slides from first person to speaking about herself in the third person, to exchanging letters with her sister.

I expected the final part of the story to rest with Snow, but the narration passes back to Boy instead as the story struggles to regain the momentum it lost in the middle. It is Boy who is tasked with recounting the awkward Thanksgiving dinner that finally breaks open the tensions that have been brewing in the Whitman family for generations. And even Boy, who thought she knew her heritage, is forced to re-examine her assumptions when her best friend, reporter Mia Cabrini, uncovers a long-buried secret about her abusive father. Unfortunately, this final reveal does not fit in well with the rest of the story, and what is intended to provide closure and reunion fractures the story irreparably instead. Oyeyemi draws equivalencies between race and gender here that simply do not stand up to scrutiny, and she handles it with none of the sensitivity and depth she brings to the rest of the story. It is no coincidence that this is also the shortest section of the book; Oyeyemi has simply not done the necessary work to integrate this unexpected twist.

Despite a number of obvious influences and references, Boy, Snow, Bird is only a very loose homage to the tale of Snow White. Boy grapples with her role as the “evil” stepmother to a child who has been taught all her life to believe in an ideal of beauty that excludes Boy’s own daughter. It is less of a retelling and more of an allusion to the question of beauty and vanity that lies at the heart of that story: who is the fairest of them all? Oyeyemi handles these topics masterfully, but falters in the end, leaving this book without the conclusion it deserves.