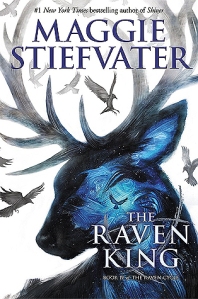 “He was a book, and he was holding his final pages, and he wanted to get to the end to find out how it went, and he didn’t want it to be over.”

The Raven Cycle draws to a close as Richard Gansey embarks on the final leg of his quest to unearth the sleeping Welsh King, Owen Glendower, and gain his favour. Adam is still tightly bound to Cabeswater even as the magical forest is corrupted by dark forces. Nor has the threat that the outside world will discover that Ronan is the Greywaren entirely abated. And Noah seems to be fading, becoming ever more ghostly and unpredictable, the merest shadow of his living self. As Blue and the Raven Boys search, two predictions hang over their heads: Gansey will die sometime this year, and Blue will kill her true love if she kisses him; it seems inevitable that the two will intersect.

All the Raven Cycle novels are decidedly atmospheric, rich in magic and emotion. The Raven King is no exception, putting both Cabeswater and the Barns to good use. Much of this is achieved through the careful use of repetition, both of words and structure. Maggie Stiefvater manages to use the word “situation” four times in a paragraph, and yet have it convey emphasis rather than lack of imagination. The structural repetition layers events on top of one another as time shivers and stops on the ley line, and this gives the story an eerie atmosphere that sometimes verges on horror. Stiefvater also begins many chapters with the phrase “Depending on where you began the story it was about…” which brings secondary characters into focus, and helps tie up their disparate story lines. It is masterfully done.

Henry Cheng isn’t a new character, but The Raven King brings him to new prominence. He comes late to the scene, and receives a lot of his character development here in the fourth volume. Stiefvater has mentioned on her blog and social media that Henry caused problems for her pacing in Blue Lily, Lily Blue, and that she had to move most of his backstory to The Raven King. The result is certainly somewhat awkward, as Henry’s integration into the group feels rushed and perhaps a little bit forced. He has important things to teach Gansey and Blue, but his late entrance means that he shows up in significant scenes you would expect Gansey to share with Blue, Adam, or Ronan, rather than a relative stranger, albeit one who is proving to be a friend.

Despite the difficulty of fitting Henry in, the stand out aspect of The Raven King is still the depth and complexity of the characters, both primary and secondary. The women at Fox Way are not the centre of the story, yet we still see how they are shaped and changed by the death of Persephone, and their ever-deepening ties to the Raven Boys. Gansey, Adam, Ronan, and Blue never feel less than fully realized. After spending extra time on Blue and Gansey and their tentative feelings for one another in Blue Lily, Lily Blue, it is Adam and Ronan who are examined more closely here, though Gansey and Blue have their time, too. We get to know individual characters better, but it is the group dynamic that is really special, charting a complex web of friendships, hopes, and secrets. Gansey describes them as a “strange constellation,” and Blue thinks of the boys as her “assembled family.” Everyone brings something unique to the table, so it is difficult for them to grapple with what it will mean if Gansey dies, or when Noah finally fades away.

The reader goes into The Raven King with many questions built up over the course of the series. Will Gansey really die? And stay dead? Will it be Blue’s kiss that kills him? Can they find Glendower before it is too late? And how will they use his favour with so many things going wrong at once? Some elements are expected, others are boldly anti-climactic. Yet the places and the characters of The Raven Cycle linger in the imagination, so it is fitting that The Raven King draws to a close with an ending that emphasizes the journey rather than the destination.

Happy Halloween fellow book lovers! For the last couple years, my book’o’lanterns have been based on current reads, but this year I went classic with a tribute to Sherlock Holmes: 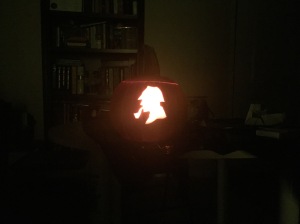 Last year I featured a carving inspired by Maggie Stiefvater’s The Raven Boys: 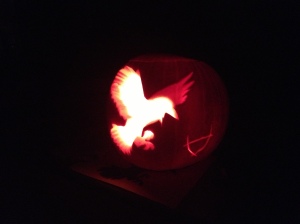 And my inaugural book’o’lantern was based on the paperback cover of  The Night Circus  by Erin Morgenstern: 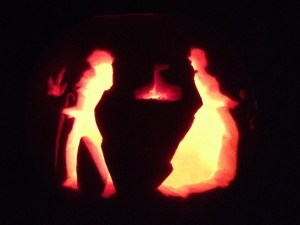 Here are some spooky and supernatural reads for the season:

Hansel and Gretel by Neil Gaiman

The Coldest Girl in Coldtown by Holly Black 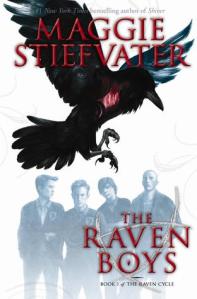 Blue Sargent is the only non-psychic in a family of seers living in the small town of Henrietta, Virginia. Though not a psychic herself, Blue has a peculiar power of her own; she amplifies the psychic abilities of those around her. Every year on St. Mark’s Eve, Blue accompanies her mother to an abandoned church, to record the names of the spirits who appear to Maura on the Corpse Road, an omen of death in the coming year. This year, for the first time, Blue sees a spirit on the Corpse Road. His name is Gansey, a student at the prestigious Aglionby Academy, an enclave of wealth and privilege in the midst of blue collar Henrietta. Gansey is no older than Blue herself, but somehow, he will die in the coming year. There has long been a prophecy in Blue’s family that if she kisses her true love, he will die, and the arrival of Blue’s mysterious half-aunt Neeve comes with two revelations. First, this is the year she will meet her true love. Second, the only reason a non-psychic would see a ghost on St. Mark’s Eve is if she is his true love, or if she killed him. Against her mother’s advice and her own rule about avoiding Aglionby boys, Blue becomes fascinated with Gansey, and his peculiar quest to find the lost Welsh King, Owain Glendower. But could rich, privileged Gansey really be Blue’s true love? She’s much more interested in his friend Adam, a Henrietta native, even if he’s a scholarship student at Aglionby.

A distinct tension runs through The Raven Boys that is rarely explored in YA; Adam and Blue are constantly contending with Gansey’s wealth, and the way his upbringing has schooled him to try to control everyone and everything around him. Ronan and Noah, like Adam and Blue, are drawn to Gansey by his quest, but their dependence upon him creates a web of uneasy relationships. Maggie Stiefvater has set up a complex character dynamic, and it is the characters more than the plot that carry the story. Despite differences of social class and upbringing, Gansey’s gang is more like a chosen family than a group of friends, and like any family, it is not without tensions.

The Raven Boys leaves many, if not most, of the key plot points open, which is not unexpected in the first of a planned series of four books. But if the pacing is a little bit slow, Stiefvater’s distinctive writing style more than makes up for it with perfect tone and atmosphere, and well-developed characters.  Book two, The Dream Thieves, is already available, with the third book expected in the fall of 2014. Book two seems poised to delve deeper in Ronan’s character, and I think this is a series throughout which I will really enjoy getting to know the cast. From Blue’s unusual family, to the Aglionby boys, to Blue herself, this book is bursting at the seams with distinctive characters.