These are my favourite non-fiction titles read or reviewed (not necessarily published) in 2015. Click the title for a link to the full review. See the previous post for my top five fiction reads of the year.

Between the World and Me

Borrowing the conceit that James Baldwin used in his 1963 best-seller The Fire Next Time, Ta-Nehisi Coates’ meditation on what it means to be black in America takes the form of a letter to his fifteen-year-old son. This technique allows the work to feel at once deeply personal and widely applicable. Coates shares how his own awareness of his place in society developed, and then contrasts that with how different his son’s upbringing has been. He rejoices in having been able to give his son a better life, and also shares the painful ways in which he has not been able to make his child’s life different, the ways in which he has felt powerless to save or protect his son from the assumptions that always shroud young black men. The best sections include Coates’ thoughts on the role education, formal and informal, has played in his life, and his reflections on what it is like to be a secular black man in a community that has traditionally leaned on religion.

The Forbidden Worlds of Haruki Murakami

Winona State University professor of Japanese literature Matthew Carl Strecher undertakes an extensive examination of two of the most fascinating stylistic elements present in the works of Haruki Murakami: magic realism, and parallel narratives. The Other World is present from Murakami’s earliest works, right through to his most recent novel, Colorless Tsukuru Tazaki and His Years of Pilgrimage, and The Forbidden Worlds of Haruki Murakami traces its evolution. Strecher explains Japanese literary traditions and techniques the Western reader might be unaware of, while also examining Murakami’s works through the lens of European literary theory, including Baudrillard, Derrida, and Barthes. He also contextualizes Murakami’s place within the Japanese literary tradition, even as he characterizes him as a global writer. For those who have read a large portion of Murakami’s work, and want to gain a greater understanding of its significance, Strecher offers a readable scholarly overview.

In this sweeping and unconventional history–which was one of the 2015 Canada Reads selections–Thomas King draws examples from the United States and Canada to illustrate the fate of the native peoples of North America since the arrival of European colonizers. King’s work is an informal account rather than an academic history, and his approach involves a healthy dose of humour, which may be off-putting to some readers given the serious nature of the topics he is dealing with. For King, humour is part of how he copes with the darkness of the history he is addressing, and this may help make a difficult topic more accessible. During the Canada Reads event, Craig Kielburger compared it to the humourous approaches used by Rick Mercer and Jon Stewart for raising awareness of current events. The litany of abuses King covers provides a very clear idea of why First Nations and Native Americans might be distrustful of government efforts to improve their current situation. While King is primarily looking back at what has already happened, understanding these issues is also crucial to moving forward.

Law professor and civil rights advocate Michelle Alexander argues that mass incarceration is the most important racial justice issue in America today. Alexander’s rhetorical device is to make a metaphorical comparison between the impacts Jim Crow once had on the lives of black people, and the disproportionate effects of mass incarceration on the African American population today. However, Alexander is careful to acknowledge and point out important differences between Jim Crow and mass incarceration. Although she sees significant similarities, she is by no means saying that the two are the same, or should be approached in the same way. Rather, her bold assertion seems designed to illustrate how a system that is intended to be colorblind can, through the conscious or unconscious biased application of discretion, have an outcome that is similar to that of an overtly racist system of control like Jim Crow. The New Jim Crow is also important because it breaks down the differences between the racial hostility and open bigotry that most Americans recognize as racism, and the quieter, more insidious forms of racial bias that are now that primary form of discrimination faced by American minorities.

Edited and selected by novelist and essayist Megan Daum, Shallow, Selfish, and Self-Absorbed is a collection of essays by writers about the decision not to have children. Each writer has their own journey to making this choice; some knew this fact about themselves all along, and others came to it more gradually. The essays vary greatly in tone. Some are quiet and introspective, while others are angry or angst-ridden. As a whole, this collection neither disparages parenthood, nor advocates the child-free life, but simply seeks to ease some of the stigma that surrounds the decision by offering a window into the minds of those who have made it, and found it to be the right choice for them. Once inside, it shows that the variety within the group is at least as great as that between those who choose children, and those who chose not to procreate. Within its scope—predominantly female, American writers—the collection offers a varied look at a personal decision loaded down with a great deal of cultural baggage.

That’s it for me! What were your favourite non-fiction reads of 2015? 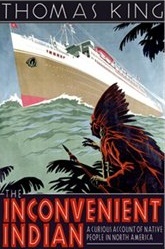 “While the hardware of civilization—iron pots, blankets, guns—was welcomed by Native people, the software of Protestantism and Catholicism—original sin, universal damnation, atonement and subligation—was not, and Europeans were offended, and incensed that Native people had the temerity to take their goods and return their gods. As though there was a money-back guarantee on God’s love.”

Novelist Thomas King takes on non-fiction with The Inconvenient Indian, a short but sweeping introduction to the fate of Native peoples in North America since the arrival of European colonizers. Although he is not a historian, King has a broad knowledge of the issues, and has lived all over the United States and Canada, enabling him to provide relevant examples from both countries. And if Canadians have any illusions that we have treated First Nations better than the United States has treated the Native Americans, they will be sorely disabused of this notion by King’s chronicle of broken promises.

King’s work is an informal account rather than an academic history, and his approach involves a healthy dose of humour. When I was still settling into the book, King’s first few jokes seemed a bit flip given the seriousness of the subject matter, but as I became more comfortable with King’s style, I realized that the humour was an essential part of his way of dealing with just how dark this history is. In fact, it is this disarming humour which may give King’s book the ability to break down the barrier around white Canada’s ignorance about First Nation’s history. The history he is recounting is enough to make you sick and angry by turns, so a little bit of humour really helps you keep going and take it all in. Defender Craig Kielburger compared it to the humourous approaches used by Rick Mercer and Jon Stewart for raising awareness of current events.

The litany of abuses King covers provides a very clear idea of why First Nations and Native Americans might be distrustful of government efforts to improve their current situation. Funnily enough, every time an old treaty or agreement is thrown out in favour of a newer, supposedly better one, Native peoples end up with less land than they had going in. While the general public seems to feel that Native peoples have gotten something for nothing with any treaty arrangement, King is not one to mince words when he calls this idea “horseshit.”  King points out that Native peoples have actually learned to look the government gift horse in the mouth, because so often it is full of “humanitarian paternalism” that ends up doing more harm than good.

It is a curious cognitive dissonance that allows most North Americans to appreciate the necessity of preserving undeveloped lands in National Parks, but simultaneously views undeveloped Native lands as a waste, or a clear indication that Native peoples don’t know how to use what they have. Indeed, land is at the crux of King’s understanding of White-Native relations, and The Inconvenient Indian is in part an enumeration of the many excuses and methods by which the government has separated Native peoples from their lands. Land and sovereignty over it emerge as crucial issues for First Nations going forward. While King is primary looking back at what has already happened, understanding these issues is also crucial to moving forward. Continuing natural resource development alone will ensure that preventing encroachment is a constant battle.

On the second day of Canada Reads 2015, activist Craig Kielburger resumed his enthusiastic defense of King’s anti-history, arguing that it should be taught in every high school history class in Canada because it is an accessible book that will help Canadians understand the issues facing First Nations people in our country. The day two debate questions addressed each of the books in turn, delving into the merits of subtle versus explicit works, and interrogating the currency and effectiveness of each title for breaking barriers. Martha Wainwright went on the offensive, arguing that the humour in The Inconvenient Indian did not necessarily help the book, and that it covered too many events too broadly, rather than going into any detail. Elaine Lui backed this argument, stating that readers might not bother with the book because it was too glib. Interestingly, while Lui felt that King’s humour was potentially alienating, she rejected the idea that the graphic language in her own selection might be similar off-putting for some readers. Kristin Kreuk dissented, tapping The Inconvenient Indian as the title that helped her learn and grow the most. Although they battled hard over the merits of their own titles, Lui and Wainwright once again voted together at the end, eliminating The Inconvenient Indian from contention. Each of the remaining books received a single vote from the other panelists.

In a telling exchange at the very end of the debate, host Wab Kinew gave to final word to free agent Kristin Kreuk, whose title Intolerable was eliminated yesterday. Martha Wainwright interjected to say that she didn’t feel that The Inconvenient Indian could be compared to the other books, though as Kreuk pointed out, that is indeed the purpose of Canada Reads. Just before this exchange, Cameron Bailey referenced last year’s winning book, The Orenda, which also addressed First Nations issues, but in the form of a novel. He felt that connecting with the characters provided that book with more depth than The Inconvenient Indian, and that The Orenda stayed with him more as a result. With the elimination of Intolerable and The Inconvenient Indian, all of the non-fiction titles have been taken out of contention, suggesting that this year’s panel connects more strongly to fictional works.

You can watch the Canada Reads debates on the CBC website.